Advancing the Forensic Analysis of Hair

The analysis of hair samples is gaining increasing interest in forensic science because of several advantages. Hair samples are easy to collect and store. The keratin protein in hair is also quite stable, and the amino acid composition of human hair keratin may vary significantly between individuals. Glen Jackson of West Virginia University has been developing various mass spectrometry (MS)-based methods for forensic analysis of hair samples, and he recently spoke to us about this work.

The analysis of hair samples is gaining increasing interest in forensic science because of several advantages. Hair samples are easy to collect, can be collected with direct supervision, and are easy to store. The keratin protein that is the main component of hair is quite stable and highly resistant to chemical and biological degradation, making it one of the more robust non-skeletal human tissues in decomposed bodies and postmortem studies. In addition, the amino acid composition of human hair keratin may vary significantly between individuals. Lastly, hair samples store a longer chronological record of drug use than most biological matrices. Glen Jackson of West Virginia University has been developing various mass spectrometry (MS)-based methods for forensic analysis of hair samples, and he recently spoke to us about this work.

In a recent study, you used gas chromatography–mass spectrometry (GC–MS) to study variations in 14 of the 21 known amino acids of keratin in hair, to investigate whether this approach could be used to determine classifiers such as age, sex, dietary habits, or geographic origin (1). One of the biggest challenges in such methods is the sample preparation. How did you address that?

Sample preparation is a necessary evil in hair analysis. Hair is tough, and it’s typically contaminated with all kinds of residues. Preparation usually involves washing steps followed by a method to break down the hair shaft. Both steps introduce variance to the resulting measurements. We address the problem by using methods that have been validated and used by others-like acid hydrolysis of hair and derivatization of amino acids-then internally validating the methods before applying them to the real samples.

In analyzing the data, you used several statistical methods, including a fuzzy rule-building expert system (FuRES), and you validated your results using leave-one-out validation. How important were those approaches in your study? And could you explain them briefly, for those who are not familiar with them?

FuRES is one of many multivariate classification approaches, and it was developed in the early 1990s by my collaborator at Ohio University, Prof. Peter Harrington. In a nutshell, FuRES builds a decision tree for the classification of objects based on the known group memberships of each object. It’s therefore a trained method. Each decision or rule has a measure of entropy (fuzziness) associated with it, which informs the user about the robustness of the rule.  Each rule is basically a principal component transformation, so it is a combination of variables (measurements) with different loading scores. We can view the loading scores at each decision branch to see which variables (amino acid concentrations in this case) are most useful at each branch in the tree. Ideally, FuRES trees will have as few branches as possible to separate the groups. We validate the approach using the common method of leave-one-out cross validation, in which we test how well the rules predict the group membership of an object that was not used to build the rules, then repeat the prediction for all the objects. If the rules don’t change much when you leave out an object, the method is generally more robust and more successful.

The results depend somewhat on whether or not we average replicate measurements within an individual before building the rules and predicting group memberships. If we average replicates within individuals before building a FuRES tree, we can predict a person’s sex with 94% accuracy (leave-one-out cross-validation rate). This is not as good as nuclear DNA analysis can do, for example, but nuclear DNA is not often found in or on the hair shaft. Determining sex from blood and urine is easily done by other methods, but these matrices can be washed away and aren’t stable at a crime scene for decades-unlike hair.

In a subsequent study, you used a similar approach to see if GC–MS analysis of hair samples could be used to diagnose diabetes (2). What results did you see in that study?

We used the same methodology for amino acid quantitation in hair, but used case-controlled groups of subjects. A total of 15 subjects had type II diabetes and 12 did not (controls). We found we had better than 94% classification rates at predicting diabetes. The amino acids that were more abundant in the hair of diabetic subjects (such as isoleucine and phenylalanine) happen to be the same amino acids that others have found to be more abundant in the blood and hair of subjects with type II diabetes, so our results seem to be consistent with similar work in this area.

You have also studied the use of liquid chromatography with isotope ratio mass spectrometry (LC–IRMS) analysis of hair samples to distinguish factors such as disease state and body mass index (3). What additional advantages does the use of isotope ratio analysis provide to this type of study?

For LC–IRMS measurements, we precisely measure the ratio of 13C to 12C in each amino acid instead of the quantity of each amino acid. The advantage of IRMS is that we can hypothetically discriminate the hair of individuals who might have identical concentrations of each amino acid in their hair. For decades, the IRMS community has known that the ratio of 13C/12C is dependent on diet, but our latest work found that metabolism has an effect, too. In other words, two people on the same diet will have different isotope ratios in their hair because they metabolize food differently. We don’t yet understand all the factors that alter the 13C/12C ratios, but it appears that body mass index and age are two factors that have a significant effect.

What advantages does LC–IRMS have over similar analyses using gas chromatography?

The biggest advantage of LC–IRMS is that one doesn’t have to derivative the amino acids in order to separate them. In GC–IRMS, amino acids have to be derivatized for the separation step, which adds carbon atoms and changes the isotope ratio of derivatized the molecule. GC–IRMS results therefore have to be adjusted properly to account for the isotopic change induced by the derivatizing agent. In LC–IRMS, the results do not have to be adjusted and we therefore have one less source of uncertainty in the results.

You have also studied the application of a mass spectrometry methods without a chromatographic separation step-laser ablation electrospray ionization–tandem mass spectrometry (LAESI–MS-MS)-to identify the presence of illegal drugs in various types of samples, including hair (4). How do the results obtained using this approach compare with those obtained using slower methods involving GC?

Using LAESI–MS-MS, we showed that we could detect biologically relevant levels of drugs of abuse in a matter of seconds, with no sample preparation (other than wetting). The approach isn’t properly validated yet, and we didn’t attempt to quantitate, but the approach has the potential to perform longitudinal analyses of hair, which is something we couldn’t do in our other work. 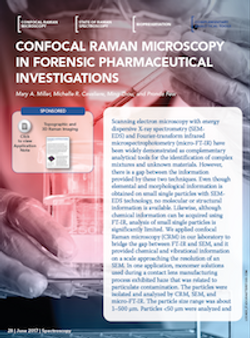