A Raman spectroscopy method was used to assess the binding of dyes to different samples of carbon-bearing shungite rock with the same carbon content, but different mineral composition.

A Raman spectroscopic method for determining the concentration of methylene blue and metanil yellow dyes in aqueous solutions, with acetonitrile as an internal standard, was developed. Using the method, the concentration of the dyes in solution was used to assess the binding of the dyes to different samples of carbon-bearing shungite rock that have the same carbon content, but different mineral composition. The proposed method makes it possible to efficiently and quickly determine the adsorption of anionic and cationic dyes by different adsorbents.

Rapid monitoring of the effectiveness of sorbents for cationic and anionic complexes is essential for many processes in industry and medicine, and also particularly in water treatment. The defining characteristics of sorbents are the specific surface and the content of surface functional groups of acidic and basic character. The qualitative characteristics of the active centers on the surface of an adsorbent can be derived from the results of adsorption of different dyes. Determination of adsorption of dyes with comparable molecular size and opposite ionic character, acid (metanil yellow), and base (methylene blue) have been used to measure the acidity of activated carbon powders (1), and the adsorption onto the perlite-cellulose composites (2). In recent years, Raman spectroscopy has become one of the most powerful analytical methods used in many fields of science and technology. In particular, Raman spectroscopy has been developed to determine the concentration of crystal violet in the liquid phase (3).

Currently, the most economically attractive water treatment methods are based on sorbents derived from natural materials. One such material is shungite rock that is an effective sorbent of a number of environmentally hazardous organic compounds. Shungite is capable of sorbing both inorganic cations and anions. Organic acids are sorbed much better; the sorption of aromatic acids by shungite is selective (4). Shungite varies in its composition, Carbon content, structure, and properties, which leads to differences in its anionic and cationic sorption activity, as well as its behavior in leaching processes (5).

The aim of this work is to develop a method for determination of surface functional groups of acidic and basic character using Raman spectroscopy in application to carbon-bearing and other materials, including shungite rocks.

Two shungite rock samples were taken from different deposits. Those have the same carbon content of 47 weight percent (wt%), but different rock-forming mineral compositions, namely quartz, mica, and pyrite for the first sample, and quartz, mica, and microcline for the second one.

Experiments on the adsorption of dyes from aqueous phase were carried out on powders of shungite rock samples with particle sizes of less than 0.1 mm. Shungite rock samples of 0.1, 0.2, and 0.4 g were placed in a flask, and filled with 20 mL of aqueous solutions of methylene blue or metanil yellow, with the initial dye concentration 160 mg/mL. Flasks were closed with lids, shaken, and let to stand at room temperature for various periods of time.

After the storage time that allowed for adsorption, the samples were centrifuged at 4000 rpm for 15 min, and then 2 mL of the supernatant was added to 0.2 mL of acetonitrile.

The adsorption capacity was calculated from the following equation:

A Nicolet Almega XR Raman spectrometer was used with 785 and 532 nm laser excitations at 300 and 20 mW power, respectively. The sample was placed in a 3 mm NMR tube and put into a holder. The signal was collected in the backscattering geometry, dispersed by a grating, and projected onto a CCD camera for spectral collection. Spectral acquisition conditions were typically 2-s exposure time with 3 accumulations, and with the cosmic ray filter on 20 s per spectrum. Processing and calculation of parameters was carried out in the framework of Omnic 8.2 software (Thermo Fisher Scientific, Inc.), and was accompanied by background removal, normalization, separation of overlapping bands, determination of their position, half-width and integrated intensities, and their corresponding errors.

The intensities of Raman spectra of aqueous solutions of dye and acetonitrile mixtures were collected at a constant concentration of acetonitrile and varying concentrations of dyes (from 1 to 180 mg/L, a total of 10 concentrations) to determine the calibration graphs (Figure 2). It is obvious that the intensity of the dye bands are sensitive to changes in concentration, and change linearly as the concentration changes. To determine the concentration of the dye in the solution, calibration curves were constructed depending on the ratio of the intensity of the dye and acetonitrile bands from the mass concentration of the dye in the solution (Figure 3). The standard errors of the estimated height of the bands for different concentrations of methylene blue and metanil yellow were not more than 3%. The considered method of investigation of the surface of carbon materials based on the application of adsorption from solutions of various dyes is of interest, due to the objectivity of the results and ease of implementation. Methylene blue is proposed as a model substance for the evaluation of adsorbents in the process of water purification from oil products (6). Methylene blue as a cationic dye and metanil yellow as an anionic dye were used to assess the sorption activity of activated carbon produced from different precursors (7,8).

Figure 2: Raman spectra of aqueous solutions of methylene blue, metanil yellow, and acetonitrile at various concentrations of the dyes at (a) 785 nm and (b) 532 nm excitation wavelengths.

Determination of Sorption Activity of Shungite

Times series profiles were generated by tracking the dye concentrations in solution before and after contact with shungite and as a function of time. Changes in the response allowed a characterization of the adsorption process over time, and the maximum adsorption was assessed. Kinetic curves of adsorption of the MB for each of shungite rock samples at different sample weights include two characteristic areas, a steeply increasing area and an almost horizontal area of the transition from the initial dynamic adsorption to equilibrium, while, for the MY, an additional, third area of smooth desorption occurs (Figures 4,5). The optimal time to achieve maximum adsorption was determined by the absence of an increase in its value over time, and was 48 h for MB and MY for the first sample, and 24 and 48 h for MB and MY for the second sample, respectively.

A difference in the speed of achieving equilibrium for different shungite rock samples occurs. For the first sample, the adsorption process of MB reaches equilibrium after 48 h from the beginning of the experiment, with a maximum adsorption capacity of 6.2 mg/g, while for the second sample, the equilibrium state is mainly achieved after 2 h, with a significantly higher, 25 mg/g value of MB adsorption (Figures 4,6). Kinetic curves of MY adsorption differ significantly from those of MB adsorption. The curves are characterized by an inflection at 48 h when the maximum adsorption values of 9.3 and 15 mg/g are reached for the first and second samples, respectively, and subsequent slight desorption occurs for both samples. (Figures 5,6).

The proposed method makes it possible to efficiently and quickly determine the adsorption of anionic and cationic dyes by industrial sorbents. Different shungite rock samples with the same carbon content are characterized not only by different values of sorption of methylene blue and metanil yellow, but also by their ratio of different affinity to base and acid dyes. Moreover, the adsorption values of the first sample are less than those of the second one for both the dyes, which indicates the suitability of the second shungite rock for both MB and MY adsorption.

Through the use of Raman spectroscopy, methylene blue and metanil yellow dyes were found to be suitable materials to assess the adsorption characteristics of shungite for cationic and anionic organized molecules. Using these dyes in aqueous solutions in the presence of acetonitrile as a standard, it was possible to develop quantitative calibration curves. This dependence was used to determine the adsorption of dyes from the solution by shungite rocks with the same carbon content, but different mineral composition. Shungite has been determined to adsorb both acidic and basic dyes, but varies in its affinity to those dyes. The proposed method makes it possible to efficiently and quickly determine the adsorption of anionic and cationic dyes by different adsorbents.

Figure 6: Adsorption of MB and MY from aqueous solutions on shungite rocks within 48 h (for samples 1 and 2).

The work is performed in the framework of the research IG KarRC of RAS, and supported partly by the RFBR grant (17-05-01160). We thank the reviewer for his constructive comments, which helped us to improve the manuscript.

V.S. Rozhkova and V.V. Kovalevski are with the Institute of Geology of Karelian Research Centre Russian Academy of Sciences, in Petrozavodsk, Russia. Direct correspondence to kovalevs@krc.karelia.ru 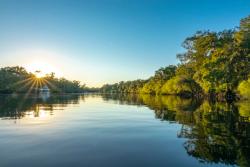