End of the Spectrum: Spectroscosaurus Rex

After all the tales of "thunder lizards" roaming the vast landscapes millions of years ago—enormous predators with giant razor-sharp teeth and voracious appetites—could they have been little more than big chickens?

Protein links have been found between tyrranosaurs and modern chickens.

It has long been agreed by paleontologists that modern birds are the descendants of dinosaurs, specifically theropods. Theropods (meaning "beast feet") first appear during the Carnian age of the Late Triassic nearly 220 million years ago, with tyrannosaurs falling under that classification. The first appearance of a birdlike creature in the era of dinosaurs is the Archaeopteryx, which lived in the late Jurassic Period around 155–150 million years ago. The Archaeopteryx possessed feathers and wings like a bird, but it also had teeth and a skeleton similar to a small carnivorous dinosaur, giving it both bird and theropod dinosaur features. Many scientists believe that because all descendants of a single common ancestor are related, and birds have evolved from ancient dinosaurs and are technically dinosaurs themselves, then dinosaurs aren't really extinct.

Using mass spectrometry, researchers have found protein links between a 68-million-year-old Tyrannosaurus rex fossil and the common chicken. Scientists found that this particularly well-preserved T. rex fossil contained proteins of the animal, which they were able to recover. This discovery came to light in 2003 when Mary Higby Schweitzer from the University of North Carolina recovered soft tissue from a T. rex bone found in Montana. With those findings, John M. Asara of Beth Israel Deaconess Medical Center and his research team in Boston were able to analyze the collagen found in that bone, matching it closely with collagen found in modern chicken bones. The major breakthrough here is that, while it has long been thought that birds evolved from dinosaurs based upon the architecture of the bones, now there is more solid evidence that they are related because of the similarities in their sequences.

Asara's team used an ion trap mass spectrometer, which can determine sequences derived from ancient organisms from peptide fragmentation patterns. After the peptides were measured for mass, Asara and his team isolated and fragmented them to uncover seven separate strings of amino acid. Asara then compared the amino acid sequences to living species, three of which matched chickens, while two others matched a newt and a frog.

These new findings are a breakthrough on two fronts. One, it was never before thought possible that protein sequences would be found in a fossil that is over one million years old. Two, it helps prove conclusively that birds and dinosaurs are indeed related. It's something to think about the next time you order chicken. 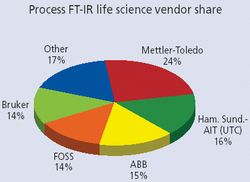