A Look at Rapid Quantification of PFAS in Non-Potable Waters

The presence of per- and polyfluoralkyl substances (PFAS) in water is an important health and environmental concern. Liquid chromatography–mass spectrometry (LC–MS) has been established as the most suitable technology for monitoring these substances. A method is described, using EPA 8327, for PFAS analysis in groundwater, surface water, and wastewater.

Environmental scientists have documented a dramatic increase in the public interest about the occurrence of per- and polyfluoralkyl substances (PFAS) in water. Liquid chromatography mass spectrometry-based PFAS detection (LC–MS) has been established as the most suitable technology for monitoring these substances. Implementing robust methodologies for targeted monitoring, identification, and emergency response to emerging PFAS is challenging. Despite a vast PFAS-related scientific knowledge base, a lack of access and training for LC–MS instruments is a primary hurdle for expanded monitoring and identification. This paper presents data acquired according to draft method EPA 8327. This method requires minimal sample preparation and adequately assesses PFAS in various environmental samples, including groundwater, surface water, and wastewater.


Per- and polyfluoralkyl substances (PFAS) are a class of more than 5,000 man-made and commercially available chemicals (1). PFAS are stable, and have water, oil, grease, and heat-resistant properties. These substances have been extensively used in the manufacturing of industrial (such as firefighting foams) and household (such as carpets, clothing, cookware, and food packages) products since the 1940s. The properties of PFAS that assist manufacturers in producing durable products are also responsible for their persistence in the environment and human body. Therefore, PFAS are resistant to biodegradation and other conventional remediation technologies. Possible health effects in humans and animals from exposure to PFAS have been reported, including increased risk of cancer, endocrine, and development disruption (2,3).

Known PFAS are currently divided into ten subclasses (4). Perfluorooctanoic acid (PFOA) and perfluorooctanesulfonic acid (PFOS) have been historically the most studied chemicals. PFOA and PFOS belong to perfluoroalkyl carboxylic acids (PFCAs; base structure: CnF2n+1COOH) and perfluoroalkane sulfonic acids (PFSAs: CnF2n+1SO3H) classes, respectively. Hexafluoropropylene oxide (HFPO), from the perfluoroether carboxylic acids class (PFECAs; base structure: CnF2n+1-O-CmF2m+1-COOH), also known as GenX, has received focused attention since its recent discovery in the environment (5). GenX was introduced in the market as a replacement of PFOA and PFOS, together with other shorter chained PFAS, as a result of the PFOA Stewardship Program. This program involved eight major PFAS manufacturers in the United States that voluntarily phased out PFOA and PFOS-related compounds by 2015 (6). The shift in PFAS manufacturing processes towards the shorter chain compounds has been confirmed by the changes of PFAS fingerprint in wastewaters (7).

The occurrence and fate of PFAS in the environment has been studied by the scientific community for two decades. Analytical methods have been developed and normally validated for specific studies, including variable lists of target compounds. Liquid chromatography mass spectrometry (LC–MS) detection (either triple quadrupole or high-resolution instruments) is required for the extremely low detection limits required for quantification of known PFAS and the identification of new ones in environmental samples. In the United States, LC–MS-based PFAS methods have had a limited reach in the environmental field outside of research laboratories. However, the recent emergence of public concern regarding the presence of PFAS in the environment, especially in water, have required laboratories to provide rapid and accurate results to relevant stakeholders. Figure 1 describes various workflows that laboratories may need to implement, depending on the end-goal for PFAS analysis. Nakayama and associates published an extensive review of the latest global trends for quantitation of PFAS and screening of new compounds in 2019 (8). In this review, research methods allow for more flexibility, especially as it applies to samples that can be analyzed using a single method and pre-treatment step.

Draft method EPA 8327 (Per-and polyfluoroalkyl substances [PFAS] using external standard calibration and multiple reaction monitoring [MRM] liquid chromatography–tandem mass spectrometry [LC–MS/MS]) was published in the summer of 2019 (13). Draft method EPA 8327 is similar to ASTM 7979 (Standard test method for determination of per- and polyfluoroalkyl substances in water, sludge, influent, effluent, and wastewater by liquid chromatography–tandem mass spectrometry [LC–MS/MS]), originally published in 2016 (14). This method expands the list of target compounds as well as sample types available for analysis, including non-potable waters. The scope draft method EPA 8327 is the quantification of 28 selected PFAS with minimal sample preparation (similar to “dilute and shoot” approaches) in non-potable waters (ground water, surface water, and wastewater). The elimination of solid phase extraction in this method reduces analysis times and  experimental bias, and minimizes PFAS contamination during sample pre-treatment. This paper presents the results from assessing PFAS in non-potable waters (groundwater, surface water, and wastewater) according to draft method EPA 8327, and aims to demonstrate the reliable and robust performance of the method.

A commercial mixture of PFAS, including targets and isotopically labeled compounds, from Wellington Laboratories were used (Catalog no. PFCA-24PAR and MPFCA-24ES). These standards were diluted to working standards with 95:5 (v/v) acetonitrile:water, in accordance to EPA Method 8327.

The LC–MS/MS analysis of 43 PFAS (24 targets and 19 surrogates, listed in Table I) was performed using a Shimadzu Nexera UHPLC system coupled with LCMS-8050 triple quadrupole mass spectrometer. A detailed description of the LC–MS/MS parameters is included in Table II. A Shim-pack GIST Phenyl-Hexyl, 2.1 mm × 100 mm and 3.0-μm particle size (Shimadzu P/N: 227-30713-03) analytical column was used to conduct the analysis, along with a Shimadzu Shim-pack XR-ODS 50 mm × 3.0 mm x 2.2-μm (Shimadzu P/N: 228-41606-92) as delay column. The delay column was installed for minimizing possible PFAS contamination from the solvents being used. Mobile Phases A and B were the same as those listed in EPA method 8327 for a binary gradient: 20 mM ammonium acetate in 95:5 water:acetonitrile and 10 mM ammonium acetate in 95:5 acetonitrile:water for A and B, respectively. A 0.3 mL/min flow rate was used in the 21 min gradient, an allowed modification of the gradient listed in EPA method 8327. The total run time of 21 min included re-equilibration for both the delay and the analytical column. This gradient (described in Table II) was developed to ensure maximum resolution between peaks in the shortest time possible with minimum co-elution of isomers.

All compound specific parameters, including precursor ion, product ion, and collision energies were optimized using flow injection analysis (FIA), bypassing the analytical column using Lab Solutions software. The lower ESI heater temperature selected reduces HF loss and minimizes false identification of fluorotelomer acids. The MRM transitions are listed in Table III. A total of 66 MRMs was monitored. The targets monitored in this work are anionic, hence, analyzed by electrospray ionization in negative mode. However, new research suggests cationic and zwitterionic PFAS might ionize better in positive mode (15). The ultra-fast acquisition rate of 555 MRM/sec of the LCMS-8050 used in this work allows for the inclusion of more targets (to be analyzed in positive and negative mode), without compromising the sensitivity in a single run. Additional details about the method and configuration can be found elsewhere (16).

Replicated samples, including reagent water, groundwater, surface water, and wastewater were analyzed during this study. Each sample was diluted 50:50 with methanol and 0.1% acetic acid, spiked with isotopically labeled surrogates, and vortexed for 2 min. The samples were then filtered through 0.2 μm syringe filters, and analyzed by LC–MS/MS.

Data presented in this paper were acquired in two batches, and analyzed in consecutive dates. Each batch included the analysis of 39 injections (9 calibration standards, 4 blanks [reagent, method, and travel blanks], 6 QCs [LLOQ, LCS, and CCV] injected along the sequence according to EPA requirements, and 20 samples [reagent water, ground water, surface water and wastewater]).

Calibration curves were performed for all PFAS targets, using a nine-point calibration curve, ranging from 5 to 200 ng/L. Figure 2 shows a total ion chromatogram and MRMs from a 5 ng/L standard; this figure demonstrates the separation and peak shape of targets at the lowest concentration included in the calibration curve.

The linearity of the curve was determined using a 1/x weighting factor, and not forcing through zero. Excellent linearity was obtained with correlation coefficients (r2) greater than 0.99 for all analytes or transitions in the two batches analyzed for collecting the data presented in this paper. Residuals of each standards were within ±30% difference from its true concentration. More detailed information about the calibration curve results can be found elsewhere (16).

A total of eight continuing calibration verification standards (QCs) were injected in the two batches consecutively analyzed for this study. Surrogates and targets were spiked at 80 ng/L (in sample equivalent). Figure 3 summarizes the concentrations of all surrogates, grouped by PFAS class, from EPA 8327 in the eight QCs samples; the red solid line represents the true concentration (80 ng/L), and the dotted red lines set the limits of the acceptable concentration range according to EPA guidelines (±30% of the expected value, equivalent to 56 and 104 ng/L). For the PFCAs class, the concentration range increases with carbon chain length; no clear trends were observed for the other classes of PFAS. All results, except for one injection of d3-NMeFOSAA, were within ±30% of the expected value, and, moreover, most to the results were within ±20% of the expected value. Figure 4 summarizes the concentrations of the eleven PFCAs included in the method. Similar trend to that observed for the PFCAs surrogates was observed for the targets. For the targets, including the other classes not shown in Figure 4, results were well within EPA’s acceptable range (±30% of the expected value) and even the stricter bracket of ±20%. The percent relative standard deviation was <20% for all compounds (results not included here) in the two batches analyzed. The results summarized in Figures 3 and 4 demonstrate the robustness and reproducibility of the method validated in this work. It is also noteworthy that maintenance was not required for maintaining the performance of the instrument after the analysis of at least 40 environmental samples (approximately 28 h of operation).

Forty environmental samples were analyzed in two consecutive batches. Figure 5 summarizes the surrogate (spiked at 160 ng/L) recoveries from 16 representative samples collected from various sources (reagent water, groundwater, surface water, and wastewater), and prepared as described in the Materials and Methods section, in accordance to EPA method 8327. Samples were analyzed in a random order in the two batches. Surrogates %recovery ranged between 82% and 92% in reagent water, groundwater, surface water, and wastewater; these values are well within the acceptable ranges (70-130%). The percent recoveries in the groundwater samples were consistently higher than in the other sample types; however, they were still within limits accepted by EPA, and ranged between 95% and 123%, except for M2PFTreA (138%). As samples were analyzed randomly, the difference could be attributed to matrix enhancement in the groundwater samples. EPA method 8327 utilizes an external calibration; the matrix enhancement could be minimized by using an internal calibration or isotopic dilution for calculating the PFAS concentrations. The %RSDs were less than 10% (half of the acceptable criteria listed in EPA method 8327), and no major differences were observed across samples types. The reproducibility in the results from the surrogate recoveries corroborates the robustness of the system inferred from the results of the QCs.

Multiple analytical methods for the monitoring of PFAS have been developed and validated over the past two decades. However, one of the challenges environmental stakeholders face for understanding the global occurrence of PFAS and the effectiveness of mitigation strategies is the lack of standardized methods. Secondly, the recent increase in PFAS by the public requires laboratories to provide results quickly. This paper demonstrates the reliable and robust quantification of PFAS, according to latest EPA method for the analysis of environmental samples different from drinking water, with minimal sample preparation; hence, it allows laboratories to increase the sample throughput, and ensure stakeholders receive information in a timely manner. 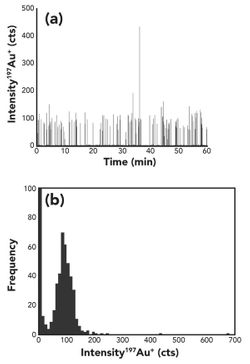 GC×GC–TOF-MS and Comprehensive Fingerprinting of Volatiles in Food: Capturing the Signature of Quality
Advertisement
Advertisement