The method presented here allows for the accurate, precise, and robust speciation, profiling, and quantification of cannabinoids in hemp oil extracts and commercial cannabinoid products for research and development laboratories.

A primary impediment to cannabinoid research is the fact that materials possessing psychoactive Δ9-tetrahydrocannabinol (THC) are considered Schedule I drugs as defined in the U.S. Controlled Substances Act. An alternative source of cannabinoids may be found in hemp oil extracts. Hemp contains a low percentage of THC by weight but relatively high amounts of nonpsychoactive cannabinoids. The liquid chromatography–time-of-flight mass spectrometry (LC–TOF-MS) method presented herein allows for the accurate, precise, and robust speciation, profiling, and quantification of cannabinoids in hemp oil extracts and commercial cannabinoid products for research and development laboratories. The method was determined to chromatographically separate 11 cannabinoids including differentiation of Δ8-tetrahdrocannabinol and THC with excellent linear dynamic range, specificity, and sensitivity.

Analysis of hemp extracts has increasingly become an area of scientific interest. Hemp is a fibrous variety of C. sativa with a low psychoactive Δ9-tetrahydrocannabinol (THC) component and contains as many as 60 nonpsychoactive cannabinoid compounds (1). Hemp oil and hemp extracts therefore offer a source of cannabinoids that can be used for research purposes in many laboratories.

An Agilent 1290 Infinity II ultrahigh-pressure liquid chromatography (UHPLC) system and 6230B LC–TOF-MS system (Agilent Technologies) were used for these analyses. The LC–TOF-MS data were compared to data collected on the UHPLC system with diode-array detection (DAD) for range and linearity comparisons.

The UHPLC system used for both the UHPLC–DAD investigations and the LC–TOF-MS work included a quaternary pump, a multisampler automated sampling system with flush port, a multicolumn thermostated column oven, and a diode-array detector. The analytical column was a 100 mm x 2.1 mm, 1.8-µm dp Zorbax Bonus RP column (Agilent Technologies). The column oven and autosampler temperatures were 50 °C and 23 °C, respectively. The needle wash was set to 3.5 s at the flush port with a solution of 25:25:50 water–isopropanol–methanol and the injection volume was 0.05 µL. The diode-array detector was fixed to a wavelength of 280 nm. Mobile-phase A was water, B was methanol, and C was 0.1% (v/v) formic acid plus 2.2 mL of 5.0 M ammonium formate per liter in water. The flow rate was set to 0.50 mL/min and the mobile-phase gradient started at 23% A, 72% B, and 5% C increasing B to 95% linearly from time = 0.00 min to time = 12.5 min while holding C constant at 5%. The method stop time was 15 min and the reequilibration time was 5.0 min, resulting in an overall cycle time of 20 min. It should be noted that the analytical run time can be reduced to 7.25 min (including a 1.0-min post time) by using a 50 mm x 2.1 mm, 1.8-µm dp Zorbax Bonus RP column (Agilent Technologies) and decreasing the gradient time from 12.5 min to 6.25 min, keeping all other parameters as above. Figure 1 shows the chemical structures for the compounds used in this work.

The experimental conditions for the LC–TOF-MS system were as follows: dual electrospray ionization (ESI) source in positive ionization mode, drying gas (nitrogen) at 10 L/min, drying gas temperature at 350 °C, nebulizer gas (nitrogen) at 40 psi, capillary voltage at 4000 V, and fragmentor voltage at 70 V. The spectral acquisition rate was 1.0 Hz over 100–1700 m/z. The internal reference mass was enabled using 121.0508730 m/z and 922.0097980 m/z as the target ions to correct for TOF drift over time.

Commercially available cannabinoid standards prepared at 1.0mg/mL in organic solvent were purchased from Cerilliant Corporation and used for method development and unknown analysis. Table I illustrates the empirical formula, accurate mass, and retention time for these compounds. Seven samples of commercially available hemp oil products were purchased from four manufacturers for unknown analysis, profiling, and quantification. Table II lists these with product descriptions and masked identifiers.

Aliquots (100 µL) of each commercially purchased sample were diluted 100-fold with dichloromethane followed by a 10-fold dilution in methanol. This limited cleanup of the samples requires a longer analysis time to allow for all the noncannabinoid components to be eluted from the column. Allowing for the longer analysis time of 20 min ensures reproducible retention times and lower carryover.

Creation of a Custom Spectral Library

Using software packages inherent to the Agilent MassHunter software suite, a custom spectral library was created. The library format is referred to as a personal compound database library (PCDL) and contains spectral data, accurate mass, retention time, CAS number, and other optional information for each unique compound including MDL *.MOL files or SMILES strings. The input data were acquired for each standard solution using the LC–TOF-MS method described above for the 100-mm column. Spectral data were copied into the PCDL. Other pertinent information was captured using the copy–paste clipboard or entered manually. After the library was built, it was used to identify cannabinoids in unknown samples akin to other common library searching workflows.

A series of known calibrator and unknown sample data was acquired on both the UHPLC–DAD and LC–TOF-MS systems through an automated sequence. Calibration curves were constructed for each targeted analyte for both methods. Concentrations of the various cannabinoids in the unknowns were determined using externally standardized curves-that is, the slope and intercept of the linear regression curves were used for quantification. Equation 1 illustrates this relationship:

where “absolute abundance” is the calculated UV absorption via UHPLC–DAD as determined by Beer’s law or total ion counts for the LC–TOF-MS data.

The UHPLC–DAD calibration curves span 50–1000 µg/mL with linear regression coefficients (r2) ≥ 0.999 for the targeted cannabinoids. Similarly, the r2 coefficients for the LC–TOF-MS data were at least 0.999 for all compounds over both the 100–5000 µg/mL and the 10–1000 µg/mL calibrator ranges. Limits of quantitation (LOQ) over these ranges were similar on both the UHPLC–DAD and LC–TOF-MS systems for all cannabinoids. Since the nonpsychoactive cannabinoid concentration in the samples is very high compared to THC levels, and the laboratory was not limited by sample amounts, LOQ and limit of detection (LOD) may not be as important for these compounds. However, the unknown samples were purported to contain very low levels of THC and this assertion should be confirmed. Therefore, we also evaluated the LC–TOF-MS data down to 12.5 ng/mL for THC LOD and LOQ experiments. A limit of detection of 1.0ng/mL could be achieved using a signal-to-noise ratio (S/N) of 3:1 as the criterion, and an LOQ of 3.0 ng/mL (S/N ≥ 10:1) for THC was determined.

The seven commercial hemp oil samples were prepared with the dilution schema described above and analyzed on the LC–TOF-MS system. Four replicate injections of each were acquired and the average, standard deviation, standard error, and confidence interval at the 99% confidence level were determined. Table III illustrates these results.

Traditionally, analysis of cannabinoid potency and profiling of cannabinoids is performed via LC with UV detectors with fixed wavelengths or diode-array detectors that offer a third spectral dimension for each chromatographic peak. However, this methodology may lack the required specificity and sensitivity to properly analyze the diversity of hemp oil products commercially available. Herein we used LC–TOF-MS to evaluate the advantages of dynamic range, linearity, specificity, and ability to profile and quantify cannabinoids in commercially available hemp extract products as compared to HPLC–UV methods. Figure 2 illustrates the DAD chromatogram and extracted ion chromatograms for the cannabinoids identified in this work using the shorter UHPLC method. In these experiments we targeted â9-THC, THCV, THCA, CBN, CBC, CBD, CBDV, CBDA, CBG, and GBGA. In many cases, even with known references and retention time information, UV detection alone is not sufficient for compound identification because unknown interferences are common in real samples and can coelute and confound compound identification. The added information of accurate mass and high mass resolving power offers empirical formula generation to assist in compound identification and the ability to extract ions of interest from the background matrix, which greatly improves specificity as compared to UV or diode-array detection. LC–TOF-MS offers good linearity over a large dynamic range with limits of detection and quantitation that are lower than the UHPLC–DAD method employed herein for comparison. This method achieves excellent chromatographic separation for cannabinoids studied, including separation of Δ8-THC and Δ9-THC with minimal sample preparation.

Analysis of the commercial samples resulted in quantitative values close to the purported concentrations offered on the product label or product website. For sample SIB, no cannabinoids were detected. Deviations occurred for SIC at 2.3 mg CBD/mL and SID was determined to be 9.3 mg CBD/mL, for which the product label suggests an approximate 8-mg/mL concentration. The ~3.5-fold lower concentration of SIC may be the result of the filtering process but this must be further evaluated. Samples SIE and SIF resulted in an approximately 50% higher concentration of cannabinoids than suggested on the product label. Lastly, samples SIA-1 and SIA-2 (same manufacturer and lot) differed in concentration determination by about 10%, but were double the purported 250 mg CBD/mL suggested on the product label. The authors acknowledge that these samples were not matrix matched to the calibrators and that may be a source for the discrepancies. Future studies will endeavor to do so and to rigorously determine method detection limits (MDL) through replicate analyses at multiple concentrations bracketing the above estimates.

HPLC with UV detection and GC–MS are the most common analytical tools used for cannabinoid potency determinations. The UHPLC conditions given here can be equally applied to systems with UV detectors, single or tandem-quadrupole mass spectrometers, and time-of-flight mass spectrometers. The LC–TOF-MS method uses UHPLC to chromatographically separate the compounds. LC–TOF-MS allows for a rapid and robust method for the speciation and of quantification of cannabinoids in commercial hemp oil extract products. In addition, limits of quantification and detection are lower than those of traditional HPLC–UV and GC–MS methods. Lastly, the large dynamic concentration range of this LC–TOF-MS method enables the identification and quantification of cannabinoids in diverse commercial products.

Mike Adams is Laboratory Director of CWC Labs in Austin, Texas. A. Roth is a QC Manager at CWC Labs. Karen Kaikaris is a consultant for CWC Labs. Joan Stevens, Sue D’Antonio, and Rita Steed are all Application Scientists with Agilent Technologies in Wilmington, Delaware. Anthony Macherone, PhD, is a Senior Scientist at Agilent Technologies and a Visiting Professor at The Johns Hopkins University School of Medicine in Baltimore, Maryland. Direct correspondence to: anthony_macherone@agilent.com 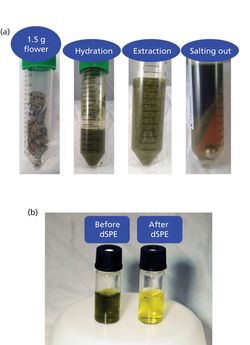