The ultimate goal of X-ray diffraction (XRD) profile modeling is to interpret XRD patterns measured from real samples. David Bish of Indiana University explores ways to streamline and accelerate the process with a new matrix methodology.

X-ray diffraction (XRD) techniques are often used to understand the nature of stacking of layers that form clay nanocrystals. But there are problems with these techniques that make applications difficult and often ambiguous. Dr. David Bish, professor emeritus at Indiana University (Bloomington, Indiana), and former students Dr. Hongji Yuan and Dr. Alberto Leonardi, have been exploring ways to streamline and accelerate the process with a new matrix methodology, as well as gaining more accurate results through the use of simulated profiles based on very large-scale atomistic models. We spoke to Dr. Bish about his group’s work in these areas, and what these improvements can mean for the future of XRD modeling.

In a recent paper (1), you describe a new software program, ClayStrat, which is based on a modified matrix methodology that reduces the number of matrix operations and improves calculation efficiency. Why is speed important in making calculations to facilitate interpretation of X-ray diffraction (XRD) profiles?

The ultimate goal of XRD profile modeling is to interpret XRD patterns measured from real samples. Previous approaches have relied on “forward” methods, wherein a model was envisioned, an XRD pattern was simulated based on this model, and changes were then made to the original model. This process was repeated until a satisfactory fit to the observed data was obtained. Ideally, one would like to use an inverse procedure, wherein only a very rough model was proposed and, together with a set of observed XRD data, the program automatically found the best fit. Both approaches require significant amounts of computing power. However, the latter requires a very fast computer and a very efficient algorithm for finding the best fit between simulated and observed data to yield a practical application given the non-linear nature of the recursive XRD model.

What is unique about the ClayStrat approach? Can you describe how the matrix methodology developed by Kakinoki and Komura (2) is more efficient?

The calculation of diffracted intensity from a layered nanocrystal, for example, an AB system, involves the summation of the product of two parts, namely diffraction intensity from a pair of layers (AA, AB, BB, BA) separated by a distance r and the corresponding statistical occurrence of such pair in the sample. Older methods use a recursive approach to calculate the statistical occurrence value separately prior to the calculation of diffraction intensity of layer pairs. The matrix method calculates both quantities simultaneously through recursive multiplication of matrices. Thus, it is mathematically more compact and efficient, particularly for a model/sample with larger crystallites.

For a model or sample containing crystallites of a variety of sizes, the traditional matrix method calculates the diffraction intensity from each individual crystallite size, and sums them according to the occurrence probability of individual sizes. This approach involves additional matrix inversion and multiplication operations that are computationally complex. The new matrix method introduces the occurrence probability values directly into the intensity calculation, eliminating the matrix inversion operation, and reducing the number of matrix multiplication operations. Thus, simulations that would require large amounts of computing power and time with recursive methods are tractable with today’s desktop computers. In addition, ClayStrat was written specifically to take advantage of today’s powerful graphics processing units on desktop computers.

Why is this XRD approach a good technique for clay and clay minerals analysis? How has this been utilized for planetary missions?

X-ray diffraction is currently the best method for probing the nature of clay minerals and other nanocrystals, because it can provide crystal structural information on assemblages of crystallites that are too small for many other studies; for example, optical methods. Other methods such as spectroscopic analyses provide derivative information only indirectly linked to crystal structure. With an observed XRD pattern in hand, whether measured on Earth or on another planet, these modeling methods can be used to interpret the data to facilitate identification and quantification. We have applied these methods to data from around the world and from Mars, with applications ranging from the petroleum industry to interpreting the origins of rocks on Mars.

Another recent paper discusses use of simulated profiles as models to analyze the XRD profiles from several natural standard kaolinite samples, assessing the reliability of previous assumptions on the nature of sample disorder and defect structure (3). What challenges did you face in the pursuit of using virtual profile models?

One of the most significant challenges was the development of a statistically valid assemblage of “virtual” crystallites in a simulated sample, and then accurately calculating the XRD profiles from these virtual samples. Clay minerals are notoriously heterogeneous, requiring tens of thousands to a million different crystallite models, simulated via molecular dynamics, to provide an accurate virtual sample. XRD profile simulation then requires calculation of the individual X-ray scattering profiles from each of the individual crystallites, ultimately summing all of these to provide the final simulated profile. The complexity of these calculations requires the use of supercomputers such as Indiana University’s Big Red 200.

What are the advantages of using a virtual profile to quantify or understand the nature of stacking disorders in natural and synthetic clays?

The use of virtual profiles elucidates the exact effects that a particular defect or disorder feature has on a diffraction profile. Our approach involves describing a large number (~million) of individual nanocrystals, each with a known arrangement of single atoms in space, to create a virtual sample. We then calculate the cumulative diffraction effects from this ensemble. Without this approach, one is never truly sure of the nature of the defects and disorder in real materials. In addition, we can simulate an arbitrary heterogeneous assemblage of nanocrystals, rather than assuming that all nanocrystals are homogeneous with the same size, shape, and type of disorder.

With our large suite of virtual nanocrystal “samples,” we plan to calculate the energetic differences between the many different states of disorder and types of defects, in an effort to predict the stability of defects and guide future profile modeling. Ideally, this approach will also allow us to interpret the causes of disorder observed in real clay nanocrystals, and to predict the types of disorder expected in real samples from specific environments. As this approach requires the use of a supercomputer, its application is necessarily limited, but further improvements in computing speed and algorithm efficiency should allow the use of personal computers in the future. This approach is not limited in application to the clay mineral nanocrystals, and can be exploited in studies of any nanomaterials, whether layered or not.

David Bish received his PhD from the Pennsylvania State University (State College, Pennsylvania) in 1977, followed by a postdoctoral fellowship at Harvard University (Cambridge, Massachusetts). He was a member of the technical staff at the Los Alamos National Laboratory from 1980 to 2003, when he joined Indiana University as a professor and the Haydn Murray Chair of Applied Clay Mineralogy. Retired in 2018, he is now Professor Emeritus at Indiana University, with affiliations in the Department of Chemistry and the Department of Earth and Atmospheric Sciences. He continues his research in the Department of Chemistry. His career-long interest is in fine-grained and hydrous minerals, and how to elucidate their structures and behaviors using diffraction and thermal analysis methods. He has studied minerals in a variety of environments, including Yucca Mountain Nevada, the Artic, Antarctica, and Mars. 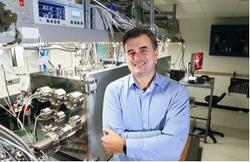