In a recent web seminar, Julian Tyson, professor of chemistry at the University of Massachusetts, Amherst, explained how to develop a reliable method for arsenic speciation. Here, he answers questions raised during the seminar.

The contamination of apple juice and rice with potentially harmful arsenic compounds has been highlighted in the news recently, including in a November 2012 article from Consumer Reports (1). For most people, rice is far and away the major source of potentially harmful arsenic compounds in our diet. Relevant agencies have recently issued revised guidelines for human consumption, and there is discussion concerning possible regulation of the arsenic content of foods.

Analytical methods capable of distinguishing between inorganic and methylated compounds are necessary to support any such regulation, because arsenic compounds vary widely in toxicity. Recent articles in the analytical chemistry literature illustrate the difficulties of making reliable measurements of the arsenic compounds in rice. Sample preparation is challenging, there is no agreement over the best chromatographic conditions, compound-dependent responses are evident, validation is difficult (if not impossible), and there is ambiguity over the severity of starch matrix effects. In a recent web seminar, Julian Tyson, professor of chemistry at the University of Massachusetts, Amherst, explained how to develop a reliable method for arsenic speciation. Below, he answers questions raised during the web seminar. A recording of the web seminar titled "Speciation Analysis: A Critical Look at Methods Involving HPLC with ICP-MS Detection, with a Focus on Rice" is available for free at http://www.spectroscopyonline.com/ArsenicRiceWebinar2013

What is the source of the arsenic that is present in rice?

Tyson: The arsenic compounds are either in the soil or in the irrigation water. The compounds in the soil already may include a significant residue from past agricultural practices, which, in the case of cotton growing in the United States, involved spraying with dimethylarsinate (cacodylic acid), monomethyl arsenate, and arsenic acid.

Could genetically engineered rice reduce the amount of arsenic in rice?

Tyson: I think that genetic engineering could help. In fact, Professor Om Parkash here at the University of Massachusetts is working on this. You can read more at http://www.bio.umass.edu/plantbio/faculty/parkash.html.

Given that inorganic arsenic compounds are polar, would they be extracted from the rice (into the water) during cooking?

Tyson: Yes, all of the arsenic species are extracted by hot water. The problem is that in standard rice cooking methods, the cooking water is absorbed into the rice and thus eaten. Cooking in excess water and then discarding the water will decrease the amount of arsenic compound consumed. More details appear in a 2009 paper by Raab and colleagues (2).

How much monomethylarsonate (MMA) do you expect to find in rice?

Tyson: I expect to find just single-digit microgram-per-kilogram levels of arsenic as monomethylarsonate. Almost all the reports of arsenic speciation in rice from around the world show that MMA amounts to no more than a few percent of the total arsenic. Often, it cannot be detected at all. The one possible exception is Korean rice. See Paik and colleagues (3).

What rice certified reference material is available for the arsenic species?

Tyson: According to the web site of the National Institute of Standards and Technology (NIST), both the rice and wheat flour reference materials are out of stock. Fortunately, as was pointed out by a member of the web seminar audience, the National Metrology Institute of Japan (NMIJ) has issued material CRM 7503-a, Arsenic Compounds and Trace Elements in White Rice. CRM 7503-a is certified for arsenite, arsenate, and dimethylarsinate — which account for 97 of the 98 μg/kg total. Inorganic arsenic accounts for 86% of the total. This standard is a white rice flour (whereas the NIST material was a brown rice flour, I believe). The Japanese reference material is available in the United States from Wako Chemicals (http://www.wakousa.com), with a lead time of about three weeks.

Even if you do buy this material, however, you should also measure spike recoveries. The spikes should be added before the sample digestion–extraction.

What would be the best overall method for measuring total inorganic arsenic, including the digestion and other sample preparation steps?

Tyson: If you are not interested in differentiating between arsenite and arsenate, try a procedure in which peroxide is a component of the extraction reagents. Grind to less than 200 μm and do not exclude any particles by sieving. Heat under pressure. Degrade the starch with trifluoracetic acid and centrifuge (filtration not needed). Then select a high performance liquid chromatography (HPLC) procedure in which arsenate is eluted first, so that you are not waiting for the other components to be eluted first. Use isocratic elution, but investigate the effect of increasing the temperature (if you can).

Could you describe the interface between the liquid chromatography (LC) and the inductively coupled plasma (ICP) instruments?

Tyson: Typically, all that is needed to connect these two instruments is an appropriate length of PEEK tubing. The flow rate of most LC separations is compatible with that of conventional ICP nebulizers, so the column eluent can be delivered directly to the ICP nebulizer. We have used miniature spray chambers in the past in an effort to minimize extracolumn broadening, but the effects are relatively minor and currently we use the standard nebulizers and spray chambers that come with our ICP instrument.

Can you please explain why gradient elution is a problem? I am using ion chromatography (IC).

Tyson: The problem that can arise with gradient elution is that the change in mobile-phase composition changes the conditions in the plasma, so that the signal for a given flux of arsenic going into the plasma changes, and so you see what appears to be compound-dependent responses, but those are probably mostly mobile-phase composition dependent responses. Once you have decided on your gradient, you will almost certainly need to calibrate the method by injecting a mixture of the species you want to determine and creating separate calibration curves for each species. How many standards to use is your decision. We usually check that the calibration is linear and then inject one (or maybe two) standards. How long before you calibrate again is a decision you need to make based on your experience with the stability of your instrument. If you add an arsenic compound as an internal standard, you could use any changes in the response to this compound as a diagnostic for drift in your instrument response. The other issue, as I am sure you are aware, is that with a gradient you need to re-equilibrate the column before injecting the next sample. This can be quite time consuming. We have approached this in the past by using two columns, one of which was being re-equilibrated while the other was in analysis mode. (This approach also requires another pump, of course.)

What are your thoughts on the use of speciated isotope dilution ICP-MS techniques for speciation?

Tyson: Speciated isotope dilution ICP-MS is a powerful concept for the investigation of species interconversion in an analytical method. I believe that most of the work done so far has been with mercury, tin, and chromium. I do not think that the technique can work for arsenic, which is monoisotopic in nature, and although isotopes ranging from 67As to 86As are known, none has a half-life longer than three months. There was a poster (820-7) at the 2012 Pittcon conference from Skip Kingston's group at Duquesne describing work in which arsenite had been labeled with 18O. Following LC separation, the species were detected by organic mass spectrometry. My take on the literature evidence is that under mild acidic or basic conditions (and heating to 95 °C under pressure), arsenic species can be extracted from rice without significant species transformation.

You mentioned that a European proficiency test was conducted to see how accurately arsenic could be measured in a variety of laboratories. What was the outcome of that test in terms of the total arsenic determination?

Tyson: In 2009, the European Union Reference Laboratory for Heavy Metals in Feed and Food organized a proficiency test, IMEP-107, on the determination of total and inorganic arsenic (As) in rice. The goal of the test was to assess laboratories' ability to determine total and inorganic arsenic in rice. Approximately 98 laboratories reported results for total As and 32 for inorganic As. The outcome for total arsenic determination was about the same as for the speciation analysis: 41% of the 98 participants do not get a satisfactory result. There is a slide in my presentation showing the results. Details of this study are available in the literature (4).

You said that about 70 papers are published every year dealing with arsenic speciation, but the "Atomic Spectrometry Update" article only had 40 citations. Why?

Tyson: In recent years, an "Atomic Spectrometry Update" review on developments in elemental speciation has been published annually in the Journal of Analytical Atomic Spectroscopy (5). The writers of these articles (of which I am one) are selective in terms of which articles are included in the update. Also, there are quite a lot of articles describing work that does not involve atomic spectrometry as the measurement technique. Work in which a method such as molecular mass spectrometry (possibly in conjunction with gas chromatography) or electrochemistry was the measurement technique would not be included. 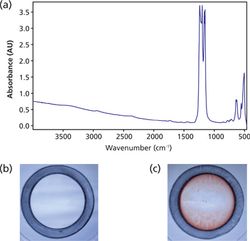 Considerations of Grating Selection in Optimizing a Raman Spectrograph