A detailed look at what makes the sky appear blue in color, using Rayleigh scattering, Maxwell's equations, and the Mie theory.

There are many ways in which spectroscopy is relevant to matters celestial. Here, we'll tackle one of the classic ones, one to which many know the simple explanation, but few know the details. In this column, we'll go over the details.

About 16 years ago (gee, have I been doing this column THAT long?), I wrote a column titled "Spectroscopy in the Sky," which was a discussion about rainbows. Well, there are other ways in which spectroscopy is relevant to matters celestial. Here we'll tackle one of the classic ones, one to which many know the simple explanation, but few know the details. In this column, we'll go over the details. I am honored to share this installment's by-line with my colleague from our Physics Department, Jim Lock, whose expertise is in particle scattering (that's a foreshadowing of the real reason the sky is blue!).

Why the Sky Is Blue — The Easy Answer

Because of Rayleigh scattering (1).

Why the Sky Is Blue — The Details

Consider an electromagnetic wave of light of angular frequency ω and wavelength λ. This wave passes through the earth's atmosphere as it goes from space to the surface of the earth. Let us pretend that air consists of molecules that have an effective radius a. The incoming wave at the position of the molecule has an electric field Einc given by the expression

where E0 is the maximum field amplitude for the frequency ω, i is the square root of -1, t is time, and Û is the unit vector in the direction of the wave's polarization. As the light interacts with the air molecule, it imposes a time-dependent induced electric dipole, p(t), on the molecule whose value is given by

The proportionality constant a in equation 2 is called the polarizability of the molecule. Technically, its units are C·m2 /V (coulombs times meters squared per volt), but because it is often combined with the 4πε0 term found in most electrostatic formulas, it is usually expressed in units of (length)3 , typically cm3 or Å3. Because the induced electric dipole moment is time-dependent, it represents an oscillation of electronic charge within the molecule. The molecule thus acts as a small antenna, producing electric dipole radiation. We can consider the behavior of this radiation from three different points of view of increasing sophistication.

where "α" means "is proportional to." To make a proportionality an equality, we need a proportionality constant. But consider the units. It should be clear that Erad and Einc have the same units — they're the same type of quantity. Thus, in order for the units in equation 3 to work out, any additional factor needs to have a net unit of the inverse of (length)3 /length, or the inverse of (length)2 — which, of course, is (length)-2. The only other factor involved in this process is the incoming light itself, which has a wavelength. This suggests that the wavelength of the incident light is part of the proportionality constant:

The intensity of the electric dipole radiation is the square of the magnitude of the field itself:

How do we interpret this expression? The constants a and r can be ignored because they are dependent on the air molecule and the distance from the air molecule, which is the same for all wavelengths of incoming light. The quantity E0 in equation 1 of course depends on the wavelength of incoming light, because the intensities of different wavelengths of light are not the same as we go across the electromagnetic spectrum (see Figure 1). However, the most intense visible light in the incoming solar spectrum is in the green region, not the blue. So, why isn't the sky green?

Actually, the most important dependence of Irad comes from the λ4 term in the denominator of equation 7. The equation implies that the intensity of the light emitted from the antenna-esque air molecules increases as the wavelength decreases, to the fourth power — that is, as light gets halved in wavelength, its re-emission intensity ("scattering," if you will) increases by a factor of 16. (The intensity of the solar spectrum, as one can see from Figure 1, varies only by about 50% through the visible region of the spectrum.) So, what light is scattered most? Light of small wavelength. In the visible portion of the spectrum, what color has the smallest wavelength? Blue light does. Hence, blue light is scattered so much more than any other color of light that, under normal conditions, the sky appears to be blue. In fact, the wavelength of blue light is about 65% that of red light, so blue light is indeed scattered about six times more than red light under normal conditions.

(Aside: Actually, violet light scatters more than blue light. But the photoreceptors in the human eye are not particularly sensitive to violet light directly, and the intensity of violet light in the solar spectrum is less than that of blue light [Figure 1]. Hence, the sky is blue.)

There is another way to look at this. Equation 7 can be interpreted using Maxwell's equations of electrodynamics, which readers may recall were the subject of a long series of installments in this column. Assume that the incident light wave is propagating in the positive x direction and that its electric field is polarized in the z direction. The air molecule's induced electric dipole moment vector, and thus the effective electric current within the molecule, oscillates back and forth in the positive and negative z directions, coincident with the incoming light's electric field. The vector potential of the electric dipole radiation A(r,t) is the solution of the vector wave equation with sources:

where c is the speed of light, µ0 is the permeability of free space, and j is the current density vector corresponding to the oscillating electric dipole moment. The radiated electric field E and magnetic field B are obtained from the vector potential A using the equations

where k = 2π/λ and is the wave number of the radiated fields. For the current density corresponding to an oscillating electric dipole moment, the vector potential in the region far from dipole reduces to

If the molecule can be modeled as a sphere of effective dielectric constant K and is small compared to the incident wavelength (that is, a << λ), then the molecular polarizability α is

where εx0 is the permittivity of free space. The intensity of radiation arising from the dipole can now be obtained using equations 9 and 10 above and the fact that the radiated intensity can be obtained from the expression

where θ is the angle between the direction of the outgoing radiation and the direction of the polarization of the incident field. Once again, we find a λ4 dependence in the denominator, verifying our previous conclusion that shorter-wavelength light is scattered more than longer-wavelength light. Not only is this result consistent with equation 7 above, it also determines the constant of proportionality. Furthermore, it shows that the spherically outgoing radiation is not isotropic; that is, there is an angular dependence to the polarization of the scattering. It is zero in the direction of the incident electric field and is strongest in the plane perpendicular to it. This leads to the circumstance illustrated in Figure 2: Looking at the sky in any direction except exactly at the sun (which you should never do with the unprotected eye!) shows that the partially polarized scattered skylight is blue.

Figure 2: Implications of equation 14. Light "scattered" at a non-zero angle shows a preference for low-wavelength light. Thus, looking anywhere except directly at the sun (caution: do not!) yields a blue sky.

Figure 3: Can you believe that this is gold? Colloidal gold (here, the colloid particles are about 100 nm in size) has a startling range of colors, from red to purple (for the largest particles). The Mie theory of light scattering was developed in part to explain such behavior.

Scattering of sunlight by small particles (air molecules or pollutant particles) is ultimately described by the Mie (pronounced "me") theory, named after the German physicist Gustav Mie (1869–1957). Using Maxwell's equations of electrodynamics, Mie derived a solution to the equations that models the scattering of light by colloidal particles, particularly colloidal gold and its seemingly strange colors (see Figure 3). As such, "Mie theory" is more properly called "the Mie solution to Maxwell's equations." In Mie's solution, the incident electromagnetic wave, the electromagnetic fields inside the particle, and the fields scattered by the particle are expanded into an infinite series of spherical multipole waves. Boundary conditions for the continuity of various components of the total exterior fields and the interior fields require that the components of the waves must be the same at the surface of the particle, and the strength of the scattered multipole waves is then obtained by solving a set of four simultaneous linear equations (internal and scattered strengths for each of the two polarizations of the light). The results are complicated, containing an infinite series of quotients of sums of products of spherical Bessel functions evaluated at the sphere surface. (Spherical Bessel functions are solutions to differential equations that show up in many physical systems possessing spherical symmetry — like light scattering by particles.) But in the limit of a << λ (that is, the size of the scattering particle is much smaller than the wavelength of the light), the results simplify so that only one term in the infinite series remains, which is the electric dipole radiation term. The ultimate result is equation 14 from above. Thus, in the limit of a << λ, Mie scattering becomes Rayleigh scattering, and the sky is blue!

James A. Lock is a professor of physics at Cleveland State University in Cleveland Ohio, where he has been on the faculty since 1978. He has taught 24 different courses, and has more than 125 research publications. His areas of research specialty are theories of light scattering by small particles, morphology-dependent light scattering resonances, optical caustics, and the modeling of atmospheric optical phenomena. He has collaborated with researchers at the NASA-Glenn Research Center in Cleveland for more than 20 years on mathematically modeling optical measurement instrumentation.

David W. Ball is a professor of chemistry at Cleveland State University in Ohio. Many of his "Baseline" columns have been reprinted as The Basics of Spectroscopy, available through SPIE Press. Professor Ball sees spectroscopy from a physical chemistry perspective, because that's his background. He recently served as Distinguished Visiting Professor at the US Air Force Academy, but is now back home in Ohio. He can be reached at d.ball@csuohio.edu. 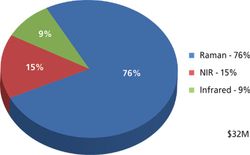