2009 Salary Survey: Salaries and Stress on the Rise

Despite the difficult economy and burgeoning unemployment rate, the average spectroscopist's salary has increased from last year. This year's 598 respondents had nearly two years more experience than last year's respondents, which might explain the salary increase.

Before we delve into the salary breakdowns, here are a few statistics about this year's survey:

Salaries on the Rise

Once again, the private sector was the largest employer, with 58% of respondents. Private sector employees reported an income of $85,666, which is slightly higher than the last two years. Respondents working in academia (21%) reported a salary of $62,264, which is higher than both the 2008 and 2007 studies. Finally, scientists working in government/national labs (16%) reported making $79,516, which is nearly $3,000 more than last year's survey (see Figure 3).

For the first time in two years the Northeast has taken the title from the Southwest for the region with the highest annual income (see Figure 6). This year, the Northeast (25% of respondents) has an annual income of $85,593, up from last year's income of $82,926. The Southwest (21% of respondents) comes in second place this year, earning an annual income of $79,111. This is roughly $10,000 less than the last two years, but in the 2008 survey the region had 34% of respondents with bachelor's degrees, 20% with master's degrees, and 41% with doctoral degrees; this may help explain the notable salary decrease from 2008 to 2009.

The data presented in this article are a small sampling of the spectroscopy community as a whole. If you would like to share your thoughts on this article, its data, or how it relates to your career, please email us at: spectroscopyedit@advanstar.com 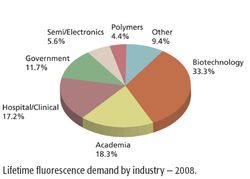