The recently developed technology of triple-quadrupole inductively coupled plasma–mass spectrometry (ICP-MS) offers a unique solution for the removal of spectral interferences in ICP-MS.

The recently developed technology of triple-quadrupole inductively coupled plasma–mass spectrometry (ICP-MS) offers a unique solution for the removal of spectral interferences in ICP-MS. Arsenic with its single isotope at mass 75 is one of the most difficult elements to measure in complex matrices by ICP-MS. This article discusses how ICP-MS-MS allows the accurate determination of As in complex samples that contain Cl, Ca, Sm, Nd, and Zr.

Arsenic (As) is regulated and routinely monitored in a wide variety of sample types (1), ranging from drinking water through pharmaceuticals, consumer products, food and clinical samples, to contaminated soil, industrial effluent, and trade waste. As well as its historical use as a poison (such as the chemical warfare agent lewisite), arsenic compounds have been widely used as pesticides, herbicides, and insecticides (for example, chromated copper arsenate timber treatment). Arsenic has also been used in pigments, metal alloys, and semiconductor devices, and occurs naturally at high concentration in groundwater in Bangladesh and West Bengal, India.

The common inorganic forms of As, arsenite (As[III]) and arsenate (As[V]) are toxic to humans; the common organic forms monomethylarsonic acid (MMA) and dimethylarsinic acid (DMA) are less toxic, and arsenobetaine (AB, the form most commonly found in seafood) is considered nontoxic (2). Regulatory limits are typically based on "total" As levels, but when the limits are exceeded, separation of the different chemical forms (or "speciation") may be required to assess potential toxicity.

The method of choice for routine multielement analysis in most applications is inductively coupled plasma–mass spectrometry (ICP-MS), which delivers low detection limits, wide elemental coverage, and wide linear measurement range. However, As is considered a difficult element for quadrupole ICP-MS because of its low detection limit requirements, poor ionization (giving relatively lower sensitivity), and the presence of spectral interferences.

All of the sample matrices used for this work were prepared using single-element stock solutions (Spex CertiPrep, Claritas grade). The acid matrix and elemental standard concentrations are shown in the caption for each spectrum and are representative of the acid matrix (dilute HNO3 and HCl) and matrix levels commonly found in ICP-MS samples.

The sample matrices investigated were

An Agilent 8800 triple-quadrupole ICP-MS system was used for the analysis of As in all the sample matrices. The ICP-MS system uses a sample introduction, plasma ion source, vacuum interface, ion lens, CRC, analyzer quadrupole, and detector system that is essentially the same as that used in quadrupole ICP-MS. However, the triple-quadrupole layout uses an additional quadrupole mass spectrometer (Q1) before the CRC, so the ions that enter the cell can be precisely controlled by tandem mass spectrometry (MS-MS) operation. This eliminates the two primary limitations of CRCs using reaction mode in quadrupole ICP-MS (3):

In contrast to quadrupole ICP-MS, in both of these cases triple-quadrupole ICP-MS can reject the nontarget ions before the cell, so both existing and cell-formed interfering overlaps ions can be avoided.

The ICP-MS instrument configuration is illustrated in Figure 1. The standard sample introduction for the instrument with a Micromist nebulizer, and standard Ni interface cones was used throughout.

The operating conditions used for the analysis of all samples are shown in Table I.

Table I: Acquisition modes used for measurement of As in complex matrices

Figure 2 illustrates the primary and well-known issue of measuring As at low levels in complex natural samples. The spectrum shown in Figure 2a shows the peak from a 1 ppb (1 μg/L) As standard in 1% HNO3, measured directly at mass 75 in single-quad, no gas mode. The background signals from the argon (Ar) dimer polyatomic ions at mass 76, 78, and 80 can also be seen. The overlaid spectra in Figure 2b show the same mass range for the original standard, plus overlaid spectra of 1 ppb As spikes in a matrix of 5% HCl (in blue) and 5% HCl plus 100 ppm Ca (in green). The polyatomic interferences from ArCl+ and CaCl+ cause a large error in the recovery of the 1 ppb As standard.

Quadrupole ICP-MS in He Collision Mode

The same spectral comparison for the same sample matrices is shown in Figures 3a and 3b, but with the triple-quadrupole ICP-MS system operated in single-quad mode with He cell gas. Helium collision mode filters out polyatomic ions by kinetic energy discrimination (KED) because of their larger ionic cross-section and higher collision rates. Although the raw signal for As is lower than in no-gas mode (due to analyte ion scattering when the cell is pressurized) the polyatomic interferences from ArCl+ and CaCl+ are effectively reduced (Figure 3b), ensuring consistent recovery of the 1 ppb As spike in all three samples (the As peak at mass 75 remains the same in the presence of the Cl and Ca matrices).

Figure 4 again shows the same three overlaid spectra as Figure 2b, but with the addition of a further sample matrix of 1 ppm each of Nd and Sm (in pink). A quadrupole mass spectrometer separates ions on the basis of their mass-to-charge ratio (m/z), so ions with a double-charge (loss of two electrons) appear at half their true mass; 150Nd++ and 150Sm++ therefore appear at m/z 75 in quadrupole ICP-MS, overlapping the 75As+ analyte ion. While Figure 3b demonstrates that He mode with KED successfully removes polyatomic interferences, Figure 4 shows that He mode is not effective against doubly charged interferences, leading to inaccuracy in the As results in the presence of a Nd or Sm matrix.

Reaction mode using O2 cell gas on a quadrupole ICP-MS system offers a solution to the problem of doubly charged interferences on As, as O2 reaction mode moves the As+ away from m/z 75 by forming an AsO+ reaction product ion in the cell. The reaction process is illustrated schematically in Figure 5. The resulting spectrum showing the AsO+ product ion at mass 91 (75As + 16O), free from overlap by Nd++/Sm++ as well as the original ArCl+ and CaCl+ polyatomic ions, is shown in Figure 6, demonstrating consistent As signal in all the sample matrices.

In contrast, on the triple-quadrupole ICP-MS system in MS-MS mode with O2 cell gas, Q1 is set to reject all ions apart from the original mass of the target analyte (As+ at m/z 75), thereby preventing all other masses from entering the CRC. The AsO+ product ion is still formed by reaction with the O2 cell gas, and is measured at m/z 91, but the 91Zr+ is rejected by Q1 and therefore cannot overlap the AsO+ product ion formed in the CRC. This is illustrated schematically in Figure 8, and the resulting MS-MS mode spectrum is shown in Figure 9.

The consistent spectra shown in Figure 9 illustrate the ability of triple-quadrupole ICP-MS to remove or avoid all of the potential overlaps that occur in the measurement of As (polyatomic ions and doubly charged ions at m/z 75, and other analyte or matrix ions that overlap the analyte product ion at m/z 91).

What is less immediately apparent, though no less significant, is the fact that the consistency of the As measurement in O2 mode on the triple-quadrupole ICP-MS system greatly simplifies both method development and routine operation. Triple-quadrupole ICP-MS ensures that all of the common matrix interferences can, for the first time, be avoided under a single consistent set of operating conditions, so analysts no longer need to customize their sample preparation, instrument operating conditions, or analytical methodology based on the sample matrix they are measuring. For many laboratories this offers a major benefit, as routine analysis of variable samples is much less problematic, and data quality is greatly improved.

The accurate analysis of As in different sample matrices is illustrated in the data presented in Table II, where triple-quadrupole ICP-MS (MS-MS mode; O2 reaction gas) data are compared to the certified values for a wide range of standard reference materials. The matrices ranged from clean water to plant tissue, animal tissue, hair, sediment, and rock samples, covering a wide variety of potential interferences on As. In Table II, both the certified and measured results are reported relative to the solutions measured, to illustrate the wide concentration range measured and the capability of triple-quadrupole ICP-MS to measure As accurately at levels down to less than 200 ppt (200 ng/L).

It should be noted that the same analytical conditions were also used to measure Se accurately in the same range of reference materials, illustrating that triple-quadrupole ICP-MS maintains the multielement capability for which ICP-MS is prized.

The development of triple-quadrupole ICP-MS provides analysts with a new, more consistent, and more reliable approach to removing spectral interferences in complex and variable samples. As illustrated for the variety of matrix-based spectral interferences on As, some overlaps can be avoided through the use of collision mode (He cell gas) and reaction mode (O2 cell gas) with conventional quadrupole ICP-MS. But neither of these approaches offers a complete solution to removing all potential interferences that may occur in the range of sample types commonly analyzed in ICP-MS laboratories.

Triple-quadrupole ICP-MS operating in MS-MS mode offers a solution in these cases, as the ions that enter the cell are controlled by Q1, and therefore the reaction processes that occur are consistent, regardless of the sample matrix.

In addition to ensuring more accurate results for interfered elements, the use of MS-MS mode also reduces the need for method development that is specific to certain sample types. This means that laboratories can simplify their method validation and routine operation by using the same analytical conditions for a wider range of sample types. 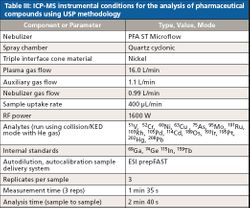 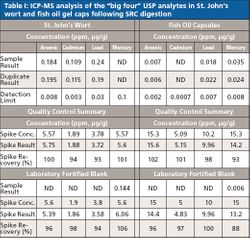 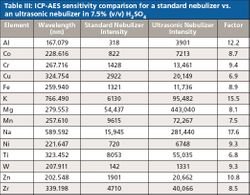