We continue our survey of the spectra of carbonyl-containing polymers by looking at the spectrum of cellulose acetate. What makes cellulose acetate unique is that it is a carbohydrate molecule that is reacted to obtain pendant ester groups. I will also introduce you to polycarbonates. Carbonates are a carbonyl-containing functional group that contain three oxygen atoms. An example of an economically important polycarbonate is Lexan, which is made into windows and car parts. In this column, we examine its spectrum in detail.

Acetic anhydride is sometimes used instead of, or in addition to, acetic acid (2). Given that paper is made from cellulose and acetic acid is found in vinegar, you could in theory make cellulose acetate at home, but I wouldn’t recommend it because you typically need a sulfuric acid catalyst. The cellulose monomer has three O-H groups that can react to form an ester. Thus, cellulose acetate, cellulose diacetate, and cellulose triacetate are possible. Cellulose acetate is commonly found in consumer products, including cigarette filters and playing cards.

We have previously discussed the infrared (IR) spectrum of cellulose (3), and we have also discussed the spectra of esters (4) and polyesters (1). Recall that acetate esters have a special high wavenumber C-C-O stretching peak at ~1240 cm-1 (going forward, assume all peak positions are in cm-1 even if not so expressed) caused by a mass effect (5). Normally saturated esters, like those in cellulose acetate, exhibit C-C-O stretches between 1210–1150 cm-1 (4). Therefore, the acetate C-C-O peak at 1240 cm-1 breaks one of our rules, but it is a useful rule break because it is one we understand and can make use of. Acetate esters are common in the world of polymers and even in the world of controlled substances; for example, heroin contains this functional group. Thus, given the importance of acetate esters, it is just as well they contain a special peak signifying their presence in a sample.

Organic carbonates contain a carbon atom with three oxygens bonded to it, but the bonding is covalent and consists of C=O and C-O bonds, which is shown in Figure 3.

The IR Spectra of Organic Carbonates

Given the structural similarity between esters and organic carbonates we might expect carbonates to follow the Rule of Three as esters do. Carbonates do have three intense peaks like an ester (7), but the vibrations responsible are a little different than in esters because the structures of esters and carbonates are different. Briefly, esters have a C=O stretch around 1700, a C-C-O stretch near 1200 cm-1, and an O-C-C stretch around 1100 cm-1. Carbonates have C=O and O-C-C stretches, but unlike esters have an O-C-O linkage and hence an O-C-O asymmetric stretching peak instead of a C-C-O peak. Table I shows the group wavenumbers for the three varieties of organic carbonates.

The IR spectrum of an aromatic carbonate and a common polycarbonate, Lexan (poly 2,2-Bis[4-hydroxyphenyl]propane), is seen in Figure 4.

Figure 5 shows the spectrum of a mixture of polystyrene and Lexan.

The three main peaks from the polycarbonate Lexan are present, with the C=O stretch falling at 1777 cm-1, the O-C-O stretch at 1230 cm-1, and the O-C-C stretch at 1015 cm-1. The “Rule of 3” peaks are present for PBT with the C=O stretch at 1719 cm-1, the C-C-O at 1280 cm-1, and the O-C-C stretch at 1118 cm-1. As a result of there being carbonate and ester functional groups present, there are two carbonyl stretches. Also, because both these functional groups have multiple C-O stretching vibrations, there are eight peaks between 1300–1000 cm-1. The two Lexan peaks in this region were easy to spot, but the PBT peaks at 1280 and 1118 cm-1 are barely discernible as shoulders, and I only found them after examining an expanded view of the spectrum. This observation points out one of the problems with mixtures, which is the fact that peaks from one molecule can hide the peaks of other molecules. We have discussed techniques for getting around the mixture analysis problem in previous columns, including spectral subtraction (9) and library searching (10).

We defined PEPs and looked at the synthesis and spectra of a common PEP, cellulose acetate. We found that cellulose acetate follows the ester Rule of Three as expected, and that it clearly exhibits the high wavenumber C-C-O stretch of acetate esters found near 1240 cm-1. We then reviewed the spectra of the three types of carbonates: saturated,mixed, and aromatic. Polycarbonates exhibit three intense peaks from C=O, O-C-O, and O-C-C stretching, similar in size and position to the trio of peaks from esters. We looked at the spectrum of pure Lexan and two spectra where it is found in a mixture. The position of the C=O stretch in carbonates may be used to distinguish the three types of carbonates from each other. The C=O of carbonates is much higher than most esters making carbonates easy to spot. To distinguish between saturated carbonates and saturated esters, use the fact that saturated carbonates have an O-C-O peak from 1280 to 1240 cm-1, whereas saturated esters have their C-C-O peak from 1210 to 1160 cm-1. 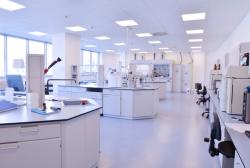