Some notes on the timeline follow. Many aspects of spectroscopy's history go back hundreds of years, such as Huygen's proposal of the wave theory of light. To be consistent with the concept of celebrating 25 years of Spectroscopy , however, we limit our window to the period from 1986 (when volume 1 of Spectroscopy was published) to today. Thus, such relatively recent and arguably more important work, such as Einstein's explanation of the photoelectric effect, and Digilab's development of the FTS-14, the first commercial Fourier transform (FT)-IR instrument, have to be left out. For those interested in tracing the history of spectroscopy back further than this review goes, other lists and timelines are available. Specific ones, limited to one or only a few technologies are available. See, for example, reference 1, which covers atomic spectroscopy. A timeline for Raman spectroscopy consisting of a PDF file containing Fran Adar's PowerPoint presentation at the Waters Symposium at the 2003 Pittcon starts at 1920 and includes developments up to the time of its presentation (2). Other, more general ones covering many different spectroscopies also exist. See reference 3, for example, which starts with Newton's discovery, in 1671, that sunlight can be broken up into its constituent colors with a prism.

The selected items included here are of necessity both eclectic and idiosyncratic. In words of one syllable or less, that means that we selected those advances for inclusion that struck us, or our advisory team, as being important. Others may differ as to the relative importance of various concepts or instruments (that's a disclaimer, folks). They are also incomplete. There's only so much that can be packed into one article.

Where possible, supporting information, usually in the form of a literature citation or a patent, verifies the time a given instrument or concept became available, but for some important developments, only the word of an expert in the field was available. In the case of patents, the date a patent was filed is considered the date the concept or device was developed, although in some cases, we report the date the patent was issued. Anyone interested enough can verify these at the patent office website, located at: http://www.uspto.gov

Some references to early literature are included, but the bibliography is not necessarily comprehensive. We attempt to provide information for further reading in various areas, by providing a very brief synopsis of work done before the timeline begins.

Atomic spectroscopy: There are some previous compilations in various areas that an interested reader may wish to consult. In the area of atomic spectroscopy, for example, Volker Thomsen has published an extensive timeline of just those advances relevant. Interested readers may consult it for a more detailed timeline covering a longer time span (1).

Optical imaging spectroscopy: Much development was initially done under government auspices, developing imaging for remote-imaging satellites like AVIRIS (see, for example, reference 4). Two intrepid members of our spectroscopic community, Neil Lewis and Patrick Treado, initially worked together under government auspices (5,6), then commercialized the imaging concept by each forming their own company, to become commercial competitors.

There were a fair number of Nobel prizes won that are based, one way or another, upon spectroscopy. We include those because they are, ipso facto, milestones in their own right, or at least represent major breakthroughs in their underlying science.

We start our timeline close to home, with something we expect most of our readers will be familiar with, namely, the people at Spectroscopy that they have seen, or they may have dealt with if they were an author. We continue with the instrumentation that has been developed and improved over these years.

January: Volume 1, issue 1 of Spectroscopy is published. Founding editor-in-chief is Heather Lafferty. (See Figure 1 for the table of contents for that initial issue.) Other editors through the years are

July 1998: Mike MacRae (returning after a stint at Wiley books)

John Coates reminisced a bit about his role in the founding of Spectroscopy :

"You may not know this, but I was in part responsible for the formation and launch of Spectroscopy magazine. At the time, I was attempting to put together a similar publication working with Marcel Dekker. In fact, I had put together an entire editorial board. Heather Lafferty, the first editor of Spectroscopy, got wind of this and contacted me and asked my opinion of producing a magazine focused on spectroscopy . . . at the time, it was under the umbrella of Aster Publications in Eugene, Oregon. We discussed what we were both doing and we agreed to collaborate. From there, we gave birth to Spectroscopy magazine. I was the first column editor with the 'Molecular Spectroscopy Workbench.'

Just thought you should know the history of why the magazine was formed and who was involved in its formation."

I have encouraged John to write up his role of initiating Spectroscopy in more detail and submit it as a future article for publication and he has agreed to do so. Keep your eyes open!

The founding Editorial Advisory Board that John referred to consisted of:

Almost simultaneously with the initial publication of Spectroscopy , Bruce Chase and Tomas Hirschfeld developed and presented their seminal work on Fourier transform-Raman spectroscopy (7,8).

April 24: Tomas Hirschfeld passed away. Tomas was arguably the most well-known spectroscopist in the spectroscopic community, being active in all types of optical spectroscopy.

This year also marks Isao Noda's beginning to publish a series of papers developing the concept of 2-D correlation spectroscopy (9–15).

"Ion Mobility Spectrometry/Mass Spectrometry of Some Prescription and Illicit Drugs" (17).

"Excimer Laser Desorption Mass Spectrometry of Biomolecules at 248 and 193 nm" (19).

"Use of a Quadrupole Ion Trap in Mass Analysis Development of MALDI" (20).

High-end UV-Vis-NIR analytical spectrophotometers designed to take accessories, developed. These include the Perkin-Elmer Lambda 9/19/900/950 Series and the Varian (Cary) 5/500/5000 series. These instruments and the wide variety of measurement accessories for them open up analytical spectroscopy to the makers of thin films, coatings, paints, and so forth.

Nobel Prize in Physics to Norman F. Ramsay for atomic clocks, which are spectroscopy-based.

Wolfgang Paul shares Nobel Prize in Physics "For the development of the ion trap technique."

Perkin-Elmer announces the first self-contained (in other words, benchtop) FT-IR spectrometer. This represents the first important step toward miniaturization of spectrometers.

"The Utilization of a Holographic Bragg Diffraction Filter for Rayleigh Line Rejection in Raman Spectroscopy": first report of holographic laser-rejection filter for Raman spectroscopy in a commercial instrument (33).

First high-resolution analytical diode array spectrophotometers developed by Hewlett-Packard (now Agilent). While diode arrays had been used in the color industry for years, these instruments, with a narrow bandpass and high stability, were a leap in technology for the analytical chemist.

Shield Torch technology is developed. This reduced secondary discharge allowing cool plasma measurements of previously unavailable isotopes such as 40Ca, 39K, and 56Fe, revolutionizing ultratrace analysis of these elements in the semiconductor industry.

Ocean Optics was founded in 1989. By April 1992, just 30 days after the successful completion of a Phase II SBIR grant, the company has introduced the S1000, the first miniaturized spectrometer, which was built on a computer plug-in board and announced this year. It was first shown it to the world at the 1993 Pittcon. There was such a crowd around the booth to see this marvel that the aisle was completely blocked, passers-by had to go around the aisle.

The Leybold-Infinicon Hapsite is generally considered to be the first truly self-contained and man-portable GC–MS instrument (45).

Nobel Prize in Physics to Bertram N. Brockhouse and Shull for development of neutron spectroscopy.

Although surface-enhanced Raman spectroscopy was first reported in 1980 (50), there is strong opinion that Osawa's paper, published 17 years later is really the seminal one (51).

Nobel Prize in Chemistry to Walter Kohn and John Pople for advanced in computational chemistry and density functional theory, which are widely used to predict spectroscopic properties.

Founding of Spectral Dimensions, one of the commercial implementers applying the early remote-sensing imagers to analytical practice (54).

"Electrophoresis Combined with Novel Mass Spectrometry Techniques: Powerful Tools for the Analysis of Proteins and Proteomes" (55).

Nobel Prize in Chemistry to Ahmed Zewail for advances in laser femtosecond spectroscopy.

The TravelIR, the first (practical, man-) portable FT-IR is introduced by SensIR (now Smith's Detection) at this year's Pittcon (61).

The first generation Octopole mass spectrometer introduced by Agilent. This allowed kinetic energy discrimination using an inert gas to eliminate polyatomic interferences without prior knowledge about the sample composition.

"Picosecond Time-Resolved Raman Spectroscopy of Solids: Capabilities and Limitations for Fluorescence Rejection and the Influence of Diffuse Reflectance" (65).

LAN control as opposed to GPIB control allowed simpler connectivity over longer distances between the computer and ICP-MS instrument.

October 11: Paul Wilks passes away. Paul was responsible for the design of many mid-IR and near-IR spectrometers, first at Perkin-Elmer, then at several companies he founded.

Nobel Prize in Physics to Willard S. Boyle and George E. Smith for their development of the CCD, an important detector used in spectroscopy and other optical devices (like digital cameras).

July 30: Bill Fateley passes away. Bill was the long-time editor of Applied Spectroscopy ; everyone in the spectroscopic community knew and liked him.

The authors gratefully acknowledge the assistance and contributions of the many experts in the various technologies who provided information included here, in bringing important information to our attention and giving advice on what to include (note, however, that we made the final selections and take all responsibility for them). In alphabetical order, these are David Ball, Shawn Briglin, Chris Brown, Bruce Chase, John Coates, Richard Crocombe, Harald Fischer, Mike Grayson, Peter Griffiths, David Haaland, Richard Larsen, E. Neil Lewis, Marvin Margoshes, Alan Rein, Ron Rubinovitz, David Schiering, David Sparkman, Art Springsteen; Volker Thomsen, and Steven Wilbur. 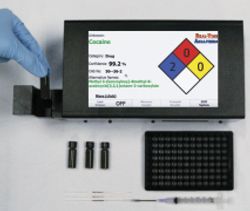