In life science research, detergents are primarily used in sample preparation to liberate cellular components through membrane disruption and to solubilize lipid-associated proteins.

In life science research, detergents are primarily used in sample preparation to liberate cellular components through membrane disruption and to solubilize lipid-associated proteins. However, detergents can interfere with applications such as enzyme-linked immunosorbent assays, isoelectric focusing, nuclear magnetic resonance spectroscopy, and mass spectrometry, and therefore, often need to be removed before analysis. Here we report a novel infrared-based method that permits fast and impartial analysis of detergent removal from biological samples. Because this method is spectrally based and label-free, determination of protein concentration can be performed simultaneously. An additional benefit of this technique is the small volume (2 μL) required for analysis, a significant fact given the often precious nature of biological samples.

Detergents, water-soluble surface-active agents distinguished by their amphipathic structure, are used extensively in protein biochemistry. Principally, this large family of molecules can be used to isolate, solubilize, and stabilize membrane proteins (1–5). Depending on their structural properties, certain detergents promote solubilization and disaggregation of recombinant proteins during the process of extraction and purification (1), and others facilitate protein stabilization and crystallization (6). Detergents are also used to reduce background by minimizing nonspecific binding or protein precipitation in a wide range of immunoassays (2,4).

All detergent molecules contain a hydrophilic head and a hydrophobic chain (or tail). This unique composition permits their spontaneous, but ordered aggregation in aqueous media resulting in the formation of stable micelles. In their pure form, detergent micelles contain from three to several hundred molecules, and the number of molecules in the micellar form (aggregation number) is an important characteristic of the detergent. Consequently, detergent micelles can vary greatly in size and the molecular weight of the micelle represents another useful parameter describing detergent properties. Micelle formation is initiated after a detergent content reaches a certain threshold termed the critical micelle concentration (CMC). Generally, detergents must be used at concentrations above their CMC to be effective (1–4).

The extraction of proteins from cells or tissue requires detergents to facilitate dissociation and solubilization. Although detergents are critical to this process, as well as numerous other preparative methodologies used in protein research, they can interfere with many downstream applications, thus limiting analytical sensitivity, so they have to be removed before the analysis (7–9). The most commonly used detergent removal methods include size-based exclusion (dialysis and gel filtration), hydrophobic adsorption, and ion-exchange chromatography (10). The choice of an appropriate method is dictated by inherent properties of the detergents used including hydrophobicity, CMC, micelle size, and charge.

UV absorbance, an array of colorimetric methods, and mass spectrometry (MS) are current options to monitor and optimize the efficiency of detergent removal (8,11,12). Because of the presence of aromatic rings, the concentration of compounds, such as Triton X (100 and 114) and NP-40, can be estimated by absorbance at 275 and 280 nm (8). However, application of this method is very limited given that detergent's absorbance overlaps with that of the protein. Specifically, for complex biological samples, such as cell culture or tissue lysates, it is impossible to establish pre-existing levels of protein and distinguish the absorbance signals produced by detergent and protein. Total organic carbon (TOC) analysis, yet another method applied to monitoring detergent removal, is also confounded by protein interference and is thus restricted to measuring detergent levels in the flow-through (removed) fraction. The use of liquid chromatography–tandem mass spectrometry (LC–MS) or matrix-assisted laser desorption–ionization (MALDI) has been reported in the case of monitoring the removal of Tween 20 and BRIJ-35 (8). SDS concentration is typically measured by a colorimetric approach using Stain-All dye (11). Similarly, concentrated sulfuric acid and phenol (12) are frequently used for concentration estimations of glycosidic and bile salt-based detergents like octyl glucoside and CHAPS. In summary, none of the existing platforms or methodologies appears capable of broad-based detergent content measurement in biological samples.

Here, we report on the development of a novel Fourier transform infrared (FT-IR)-based method for fast and impartial analysis of detergent concentration in biological samples. The method uses a hydrophilic polytetrafluoroethylene (PTFE) membrane engineered for sample retention and optimal transparency in regions of the IR spectra used for analysis of biological samples. Aqueous samples are applied directly onto the membrane, dried, and analyzed by FT-IR, with minimal volume requirement (2 μL). Because of the specificity of the absorbance bands, the technique offers simultaneous detection of multiple species, such as protein and detergents reported here, without interfering with one another. This dual capability is well suited for the optimization of protein preparative processes where the reduction of detergent content is ultimately required.

To verify the application of FT-IR to monitor detergent removal, 0.5% deoxycholic acid sodium salt (EMD Millipore), 1% NP-40 (Sigma), 1× RIPA lysis buffer (EMD Millipore) prepared with Dulbecco's phosphate buffered saline (PBS, EMD Millipore), and CytoBuster protein extraction reagent (EMD Millipore) were used. In each case, 2 μL of sample solution was applied onto the membrane position; this volume was used for all concentration estimates. The spectrometer was initially calibrated with each of the analyzed detergents and both lysis buffers. Sample concentrations were determined in reference to their respective calibration methods.

Bovine gamma globulins (Bayer) at 2 mg/mL in PBS and bovine liver tissue lysates (prepared with CytoBuster and RIPA lysis buffers), total protein content at around 3 mg/mL each, were used to demonstrate the application of the FT-IR-based method for simultaneous monitoring of detergent removal and protein recovery. Protein concentration in the original sample was used as a reference point for 100% recovery. Protein concentrations were determined in reference to a calibration curve developed using bovine serum albumin (BSA) from the National Institute of Standards and Technology (NIST) diluted in PBS (EMD Millipore).

Size-based separation via centrifugal diafiltration was established as the method for detergent removal. For this study, Amicon Ultra (0.5 and 2.0) centrifugal filters (EMD Millipore) were used according to the manufacturer's recommendations. Briefly, 500 μL of investigated detergent or buffer solution was placed in AU-0.5 or AU-2.0 devices. In the case of the AU-2.0 device, the volume was adjusted to 2 mL by addition of 1.5 mL of PBS. The devices were spun at 14,000g for 5 min (AU-0.5) or 7500g for 5–15 min (AU-2.0). The retentate volume from each device was adjusted to 500 μL by the addition of PBS; the remaining detergent concentration was estimated by FT-IR. For each sample, the above procedure was repeated twice for a total of three spin-removal and analysis cycles. Detergent removal was analyzed using three devices per each nominal molecular weight limit (NMWL; 10 kDa, 30 kDa, and 100 kDa).

Sample Presentation to the IR Beam

FT-IR analysis of aqueous-based biological samples is achieved by application of the analyte onto a hydrophilic PTFE membrane incorporated into a measurement card. The membrane spectrum contains a strong signal between 1100 and 1300 cm-1, but it is transparent in the IR region above 1300 cm-1 used for the analysis of biological samples (Figure 1a). The hydrophilic spot for sample application (see Figures 1b and 1c) is surrounded by a hydrophobic ring generated by mechanical removal of the hydrophilic surface that retains an analyte permitting precise presentation of the entire sample to the IR beam (13,14).

Figure 1: Sample presentation to FT-IR beam: (a) MIR signature of PTFE membrane; (b) the design of sample spot allowing for retention of analyzed sample in the mid-IR beam (20Ã magnification); (c) distribution of the sample dried on the spot. Sample: 2 Î¼L of 4 mg/mL cytochrome c in CytoBuster protein extraction reagent (20Ã magnification).

Because of their complex chemical compositions, detergents absorb in many different regions of the IR spectrum. The symmetric stretching vibrations of C-H bonds (2840–2870 cm-1) provided an ideal candidate for detergent analysis and are utilized in the reported method (Figure 2). Comprehensive analysis of various detergents demonstrated a high degree of variability in the slope of the calibration curves (data not shown), strongly suggesting the requirement for individualized calibrations.

To verify efficacy of an FT-IR-based approach to monitoring detergent removal, the following solutions were employed: NP-40 (nonionic detergent), sodium deoxycholate (anionic detergent), RIPA buffer, and CytoBuster protein extraction reagent. The latter two buffers, each containing multiple detergent types, are commonly used for the extraction and solubilization of cellular proteins. Linear calibration curves for each of the analyzed detergents and lysis buffers were prepared before the analysis. Size-based separation via centrifugal diafiltration using Amicon Ultra 0.5 and 2.0 (NMWL; 10 kDa, 30 kDa, and 100 kDa) filters has been used as a detergent removal method of choice. Overall, detergent properties could have been used in predicting efficiency of the removal by size exclusion (Figure 3). Specifically, sodium deoxycholate, characterized by a relatively high CMC (2 mM) and small micelle size (MW = 1200–1500 Da), was effectively cleared to below the reliable instrument detection level (0.031%) in less than three centrifugation cycles. In stark contrast, the NP-40 detergent, which is characterized by relatively low CMC (0.29 mM) and high micelle size (MW = 90 kDa), could only be efficiently removed through use of the 100 kDa NMWL format. Interestingly, CytoBuster was removed below reliable detection level (0.016×) in three spins while RIPA was resistant to clearance by the two devices harboring smaller NMWL membranes.

The primary structure of all proteins and peptides is defined by a chain of amino acids linked covalently via peptide (amide) bonds. Amide bonds absorb electromagnetic radiation in multiple regions of the IR spectrum, including a strong band at 1600–1690 cm-1 ("Amide I"). The reported FT-IR method utilizes strength of the Amide I band to determine protein concentration. Because of spectral separation of the analysis regions used for detergent and protein quantitation, collection of a single FT-IR spectrum permits simultaneous analysis of both molecular species (Figure 4).

Critical to the process of detergent removal is the need to retain protein, both content and concentration. Interestingly, the results obtained during the analysis of detergent removal from samples containing protein could not have been predicted based solely on properties of the detergent. Figure 5 clearly shows that when mixed with protein, in this example IgG, sodium deoxycholate is as difficult to remove by size-based diafiltration as NP-40 or RIPA. Within the analyzed buffer set, only the CytoBuster reagent offered effective detergent removal (~90% in three spins) without compromising protein retention. Moreover, the lysates required fourfold dilution (achieved through use of the larger AU-2.0 device) to produce noticeable detergent removal. With three spin cycles using the AU-2.0 device, CytoBuster removal exceeded 90% (Figure 6). However, detergent clearance was accompanied by a substantial loss of protein content (~60%), suggesting that for heterogeneous mixtures containing a wide range of molecular weight species, such as cell lysates, size-exclusion methodologies may not be the optimal approach for detergent removal.

FT-IR spectroscopy is a rapid, universal, and highly effective method for detection and analysis of biomolecules suspended in solution that is based on the unique spectral signatures of analyzed species. More specifically, the work presented here demonstrated the application of FT-IR for simultaneous determination of protein and detergent content in biological samples. Most notably, reported quantitation requires single-time instrument calibration with the detergent of interest permitting standardization across both sample types and processing runs. Protein quantitation is performed using preloaded, standard NIST BSA calibration. In addition, the reported method can be used in parallel with the majority of known detergent removal techniques. Overall, the results suggest that optimization of a sample preparation workflow, including detergent removal, are confounded not only by the nature of the starting material (cell or tissue lysate), but also by the detection requirements and sensitivities of the downstream analytical tools. 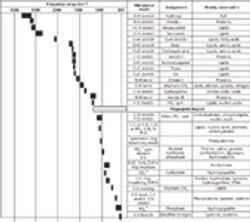 The Use of Raman Spectroscopy in Cancer Diagnostics 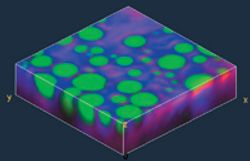