Advances in ICP-MS Detection of Selenium in Proteins

Joanna Szpunar of the National Research Council of France discusses her use of ICP-MS methods to detect trace levels of human selenoproteins in cell extracts and for the identification of selenium containing proteins in rice.

Selenoproteins play an important role in human physiology and health, and as a result, sensitive methods are needed for their analysis. Joanna Szpunar of the National Research Council of France has been working with bioinorganic speciation analysis and hyphenated techniques for metallomics studies for some time. She recently spoke to Spectroscopy about using laser-ablation inductively coupled plasma–mass spectrometry (LA-ICP-MS) to detect trace levels of human selenoproteins in cell extracts and about her work with ICP-MS-assisted electrospray tandem MS for the identification of selenium-containing proteins in rice grown on seleniferous soils.

In a recent paper (1), you described a semiquantitative LA-ICP-MS method for the nontargeted detection of trace levels of human selenoproteins in cytoplasmic cell extracts. Can you provide a brief description of the technique and explain why this study is important?

The concept proposed by our group at the Laboratory of Analytical Bio-Inorganic Chemistry (CNRS-UPPA UMR 5254) in Pau, France, consists of the introduction of the selenium-selective ICP-MS detection step into a classic proteomics workflow. Except for this step, the overall methodology follows the usual proteomics scheme, including protein extraction and separation by isoelectric focusing. This approach allows focusing on the protein bands containing selenium (selenoprotein), which are minor species present in a matrix of many other proteins and are difficult to study due to the sample complexity.

The importance of the study results from the role played by selenoproteins in human physiology and health and the need for quantitative information on the kinetics and hierarchy of their expression.

What are the advantages of your method over previous methods for studying these proteins?

The two important advantages of our method are the sensitivity of selenium-selective detection allowing detection of protein down to 1 ng/mL (as Se in cell extract) and the ability to carry out a screening for the whole selenoproteome without the use of radioactive 75Se.

What challenges did you face in developing this method?

The main challenges included optimizing the sample preparation procedure to minimize the selenoprotein losses and maximizing the detection power of our LA-ICP-MS system.

In another recent paper (2), you described a selenium-targeted bottom-up approach using capillary high performance liquid chromatography and ICP-MS-assisted electrospray tandem mass spectrometry for the identification of selenium-containing proteins in rice grown naturally on seleniferous soils. What are the advantages of this ICP-MS-assisted approach for studying the presence of selenium in rice proteins? Has it been applied for similar studies?

This approach, based on preliminary LA-ICP MS of one dimensional gels followed by elemental imaging of pre-selected two dimensional gel areas, was first introduced in an earlier paper, which focused on selenium-containing proteins in wheat (3). It is a part of our research on selenium enrichment of staple foods that are part of the daily worldwide diet and thus are interesting from the point of view of possible supplementation. As I have already explained, the use of ICP-MS simplifies the analysis, which allows the selection among hundreds of matrix proteins for the ones containing selenium. In this way it reduces the time and effort necessary for the subsequent analytical step-protein identification. Instead of processing all the proteins, only those of interest are investigated.

Our current analytical developments are focused on the optimization of procedures for fully quantitative studies of human proteome, which requires improvements of both sample preparation and instrumental parameters due to extremely low selenoprotein levels in nonenriched samples. Also, we plan to establish validation procedures for our studies of selenium-fortified foodstuffs.

Interpretation of Raman Spectrum of Proteins 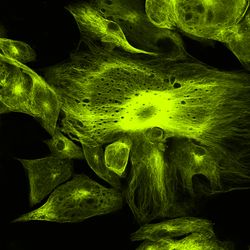