This study focuses on United States Environmental Protection Agency (US EPA) Method 524.3 for volatile organic compounds (VOCs) in water using gas chromatography–mass spectrometry (GC–MS). The GC sample introduction and separation technique specified by the EPA is purge and trap and the detector is MS. This article discusses optimizing MS and chromatographic separation parameters when using alternative carrier gases. In particular, it discusses the results of using nitrogen and hydrogen as alternate carrier gases to helium for EPA Method 524.3 for VOC analysis and specifically the impact of MS and chromatography parameters on the optimization process. Data are presented showing that nitrogen could be a more suitable carrier gas than hydrogen when compared to helium.

The United States Environmental Protection Agency (US EPA) has established several methods to ensure safe and contaminant-free drinking water. One of these methods is described in EPA Method 524.3 (1), the determination of 75 volatile organic compounds (VOCs) using purge-and-trap sample concentration and gas chromatography (GC) coupled with mass spectrometry (MS). In this method, the volatile components are concentrated onto a trap, which is then heated to elute the compounds onto a GC column, typically using helium as a carrier gas, where they are separated and finally detected by MS. However, the concerns of a helium shortage and the significant increase in market prices have resulted in chromatographers investigating the use of other carrier gases to see if acceptable performance can be achieved. This article describes a suite of MS and chromatographic separation optimization experiments that were performed to better understand whether hydrogen and nitrogen can be used as alternative carrier gases to helium and, in particular, how they compare from a performance perspective when monitoring VOCs according to EPA Method 524.3.

What Are Some of the Challenges to Using Hydrogen and Nitrogen?

Even though hydrogen has excellent chromatographic separation efficiency with the widest range of useful linear velocities when compared to other carrier gases, it is extremely reactive and poses a safety risk, and as a result may not be the most suitable choice. In addition, the pumping efficiency of hydrogen is less than that of helium. Pumping efficiency is an important consideration because a good vacuum is critical to minimize collisions between target analytes and the carrier gas during electron ionization (EI) spectral acquisition. Additional collisions may result in atypical EI spectrum for targets and degraded sensitivity, mass resolution, and linear dynamic range. Furthermore, collisions in the source between the analytes and hydrogen atoms present may result in protonation. For these reasons, there are concerns about meeting the method tuning criterion using hydrogen as the carrier gas.

Nitrogen also has its challenges. The heavier nitrogen molecule may scatter the analyte ions to a greater degree in the ionization source and in the analyzer, and may degrade the detection limits for the same analyte masses compared to helium. Finally, nitrogen's narrower range of useful linear velocities than helium or hydrogen can be easily overcome by careful flow rate selection.

Another concern with using nitrogen is that it is more easily ionized than helium and therefore changes the space charge conditions in the ion source. Ionization of nitrogen within the source can also reduce the number of electrons available to ionize target compounds. In addition, nitrogen can cause scattering of molecular target ions in the analyzer. Tuning MS conditions can help to alleviate some of these problems, but unfortunately it may also defocus the electron beam, which can lead to less efficient analyte ionization. All of these limitations can cause reduced sensitivity when switching from helium to nitrogen as a carrier gas. Table I shows a comparison of the three gases, with regard to a number of performance metrics.

The goal of the study was to meet all EPA Method 524.3 validation protocols using hydrogen and nitrogen as carrier gases by overcoming the traditional limitations described previously. The drinking water method was chosen because it has the most aggressive detection limits of any of the EPA methods for VOCs. It was believed that low detection capability was the most critical challenge to overcome, and if Method 524.3 requirements could be met, performance metrics for other EPA methods could also be achieved.

A narrow-bore column with a low flow rate was used, which reduced the amount of nitrogen and hydrogen molecules in the source. This approach resulted in improved vacuum efficiency, increased sensitivity, and reduced protonation, thus overcoming the mass spectral challenges of these carrier gases.

To prove this concept an example is provided using nitrogen. Two columns were investigated. The first was a 20 m × 0.18 mm, 1-μm df Restek VMS column, coupled to a narrow-bore piece of deactivated fused silica. The VMS column offered excellent separation of the compounds of interest, and the deactivated fused silica offered the increased backpressure necessary to operate the inlet at the low flow rates being investigated. Since connectors can often bring ease of use issues, the method was also developed on a 40 m × 0.18 mm, 1-μm df Restek VMS column. The 40-m length provided enough back pressure that the added fused silica was unnecessary. Figure 1 shows the total ion chromatograms (TIC) of the EPA Method 524.3 20 ppb test mix for each of the three carrier gases.

To investigate the effect of reducing the amount of nitrogen in the source, the target compound intensities were compared using nitrogen column flow rates of 0.3, 0.4, 0.6, and 0.8 mL/min. Ultimately, 0.3 mL/min was selected as the nitrogen flow rate because it provided efficient peak widths and target compound separation at a vacuum of 1.8 × 10-5 Torr.

The EPA tuning criterion for bromofluorobenzene was met for each carrier gas before calibration and was also continuously verified during the experiments. The results are displayed in Table IV.

The following additional experiments were carried out on all three carrier gases to ensure Method 524.3 initial demonstration of capability (IDC) was met:

Using the optimum linear velocity for nitrogen, the chromatographic performance is very similar to helium on both columns tested; therefore, chromatographically, nitrogen works for this method, as demonstrated by the TICs in Figure 1. Additionally, the tuning criteria were met using all three carrier gases as demonstrated in Table IV. Therefore, under these GC–MS conditions, hydrogen protonation is not a concern for bromofluorobenzene tuning.

An increase in nitrogen flow rate resulted in a decrease in target response and an increase in the background of N3+ (m/z 42). This result suggests that the increase of nitrogen molecules in the source decreased the response of the target analyte compounds, which could be attributed to a combination of increased electron consumption by nitrogen ionization, resulting in reduced target analyte ionization, and increased collisions of nitrogen molecules and ions with the analytes.

Further study is required to determine the cause of this decrease in response and will be the focus of future work.

Calibrations were qualified as required under EPA Method 524.3 (section 10.1.10). Table V contains the correlation coefficients and the reporting limit results. The range of correlation coefficients was 0.9990–1.0000 across the components. In addition, Table V contains the signal-to-noise ratio (S/N) achieved at the reporting limit. Please note a shorter list of targets is tabulated for space requirements; however, the full list of 75 compounds is available in the on-line version of this article.

The method precision and accuracy criteria in Method 524.3 for the midpoint standard are ±20% and 80–120%, respectively. The performance criteria for all three carriers at the midpoint were exceeded. The precision results on selected targets are presented in Table VI. The results for both UPIR and LPIR criteria, calculated using the MDL, which are a part of the EPA Method 524.3 IDC requirements (section 9.2), are also displayed in Table VI. The method limits for the UPIR and LPIR are from 50–150%.

The results of this study show that by using optimized GC–MS conditions, hydrogen and nitrogen are appropriate to use as alternate carrier gases to helium for EPA Method 524.3 analysis. With these optimized conditions the sensitivity limitations of these two gases have been overcome. Since nitrogen is more inert, less expensive, and doesn't have the safety concerns of hydrogen, it is recommended as the superior option for helium carrier gas replacement.

Lee Marotta is with PerkinElmer Instruments in Shelton, Connecticut. Tom Hartlein, Jacob Rebholz, and Roger Bardsley are with Teledyne Tekmar in Mason, Ohio. Robert Thomas is with Scientific Solutions in Gaithersburg, Maryland. Direct correspondence to: lee.marotta@perkinelmer.com 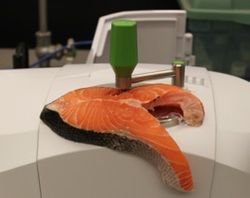 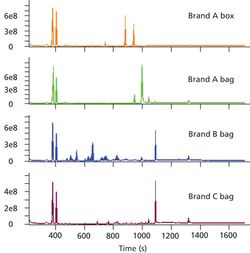 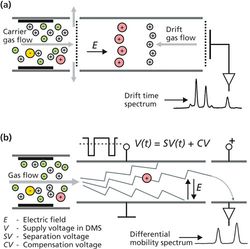