The newest generation of top TOF-TOF instrumentation provides scientists with two MS-MS methods for de novo sequencing. For highest specificity, laser-induced decomposition with post-fragmentation acceleration TOF-TOF MS is the method of choice, providing clear spectra with readily available amino acid and sequence-specific ions such as i-, a-, b- and y-ions. For in-depth analysis of selected peptides, high-energy collision-induced dissociation (CID) is very valuable as well.

Meanwhile, many major developments have been taking place concerning advanced biomarker panel discovery, validation, and identification. Here again, MALDI-TOF-TOF plays a commanding role, providing seamless integration into clinical proteomics solutions for high-resolution peptide and protein putative biomarker panel discovery, identification, and validation. Generally, such solutions are approved for research only, and are not yet in the clinic — the next big step.

Another rapidly developing MS method is advanced MALDI molecular imaging. A recent innovation in quantitative proteomics in this field is 2D peptide imaging of cells or tissue extracts as an application of MALDI molecular imaging. Sliced tissue sections can now be scanned with a very small laser focus and analyzed rapidly at 200 Hz, and with very high levels of sensitivity. This approach is fully supported by new imaging software, avant-garde algorithms, and workflows. A simple click on any spot on a color map of cancerous tissue, for example, provides the research scientist with all the detailed MS data supporting that colored spot, whether they are protein, peptide, or drug metabolite data. Visualization of the spatial distribution of proteins, drug candidate compounds, and biomarkers is a compelling tool in the exciting fields of putative biomarker panel evaluation and drug development. Coupled with wizard-driven workflow, MALDI-TOF MS provides a fast, meritable screening tool for direct analysis from tissue.

Unequaled mass accuracy has become available over a wide dynamic range. For example, ESI micro TOF-quadrupole spectrometers can reach a mass accuracy of better than 3 ppm, using innovative detection technologies. Such instruments can take advantage of the stability of micro TOF spectrometers over an exceptionally wide dynamic range, without tedious recalibration routines. Mass position is kept stable for hours during temperature changes and over a wide dynamic range with significant variations in sample concentration, a critical consideration for research scientists. As continues to be the case with LC–nuclear magnetic resonance (NMR)–MS(n) , such ESI TOF-quadrupole mass spectrometers are being closely coupled to top-of-the-line NMR spectrometers (now reaching up to 950 Mhz) to provide more in-depth useful knowledge.

Using the most advanced algorithms, scientists now compare true isotopic patterns against their measured spectra. Sophisticated software determines the correlation between measured and theoretical isotopic patterns, leading to results with significantly increased confidence. This combination drastically reduces the number of possible formula candidates and leads to unequivocal determination of elemental compositions of compounds.

Modern functional proteomics demands a step beyond just protein identification. It is becoming more and more essential to unravel the many modifications proteins undergo, triggering their biological activity. Unique capabilities for PTM discovery are now available. With advanced ETD, scientists are equipped for specific information-rich PTM analysis using the new generation of highest capacity ion traps. ETD techniques allow peptide and protein fragmentation while preserving modifications such as phosphorylation or glycosylation. This result gives researchers easy access to protein sequencing and simultaneous identification of type and location of various PTMs.

In addition to all this good news for the life sciences, hybrid quadrupole-hexapole (Q-h) FT superconducting magnet mass spectrometers have now become available commercially up through 15-T magnetic fields for on-the-fly ultrahigh-resolution LC–MS–FT-MS analysis. The FT-MS architecture provides flexibility and performance for the most challenging problems and is seen as synonymous with superior performance. Q-h FT-MS combines the power of FT-MS with the latest quadrupole instrumentation (complete with linear ion-trapping modes) and multipole collision cell for a quantum leap in analytical capability. The unique geometry provides facile and efficient precursor mass selection with collision-induced dissociation in the Q-h "front end" to the FT-MS system for on-the-fly ultrahigh-resolution LC–MS–FT-MS analysis. Moreover, the Q-h "front end" to the FT-MS architecture provides added functionality for the enrichment of low-abundance species via mass selective accumulation. Futuristic features include LC–MS-MS with data-dependent acquisition, using unified software solutions. Data can now be acquired faster than one spectrum per second, with resolving power of greater than 100,000, ideal for LC–FT-MS and LC–MS–FT-MS research.

Scientists can perform comparative analysis of complex proteomes for biomarker discovery by employing differential isotopically labeled acetylation (data to be published) followed by LC–LC–FT-MS on a state-of-the-art 12-T FT-MS. The analysis could be performed even more precisely on an ultrahigh-resolution 15-T FT-MS system.

A fundamental challenge in proteomics has been to discover disease biomarker panels by comparing complex proteomes. Gel-based approaches are quite useful but can be limited by sample complexity or by the nature of proteomes compared (for example, highly hydrophobic membrane-associated proteins). Multidimensional LC can overcome some of these problems but can be limited by mass tagging strategies using reagents, which can be expensive or hard to synthesize, or which can target reactive side chains not present in all peptides. Scientists have developed an exceptional technique for comprehensive binary proteome comparison that employs isotopically labeled acetic anhydride to label all peptides in a sample, coupled to multidimensional LC separation with the ultrahigh mass accuracy and resolving power of the 12-T FT-MS mass spectrometer for sample analysis.

Protein samples are digested with trypsin and the peptides are mass tagged by labeling with either acetic anhydride or hexadeuteroacetic anhydride. The peptides from each sample now differ in mass by increments of 3.019 Da. Equivalent amounts of sample peptides are mixed and separated by high performance liquid chromatography (HPLC), either one-dimensional (1-D) reversed-phase LC, or 2-D LC employing a strong cation exchange (SCX) column and a C18 column. Online MS spectra typically are acquired with 12-T FT-MS mass spectrometers, after which the spectra are analyzed to identify the monoisotopic peaks. A list is further filtered to locate labeled and unlabeled doublets spaced by the proper mass difference. The intensity ratios of the peptides are then used to quantify the relative abundance of the proteins in the original samples.

With scientists' goal of comprehensive proteomic comparison, their first need is to compare the numbers of peptide pairs detected in traditional 1-D reversed-phase LC–FT-MS with the number of peptide pairs detected in 2-D LC–FT-MS. To accomplish this, sophisticated software has been written to detect and quantify these peptide doublets in a completely automated manner.

A monoisotopic peak-picking algorithm is capable of analyzing overlapping isotope patterns that are often present because the label adds only three mass units to the analyte. Furthermore, the scientists' clever algorithm takes into consideration multiple labeling, multiple charging (changing the observed mass spacing), and the mass error of the instrument during the doublet identification. Clearly, coupling the high resolution and mass accuracy of FT-MS with a mass-tagging approach that potentially labels all peptides in a sample will allow scientists to interrogate complex protein samples more thoroughly for subtle, yet biologically relevant differences in protein expression. Furthermore, this approach should allow scientists to compare relative fold differences of multiple peptides from a single protein, thereby increasing the accuracy of the observed ratios. This approach has been applied successfully to the discovery of protein biomarkers in plasma for early detection of lung infection in cystic fibrosis patients.

With all these exceptional enabling life sciences tools now in their toolbags, research scientists worldwide are diving much deeper into the proteomes. 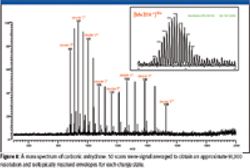 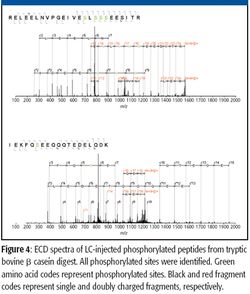