A newly developed high-throughput method for the quantitation of vitamin D using both multiplexed LC and on-line SPE is discussed.

Recently, liquid chromatography–tandem mass spectrometry (LC–MS-MS) has emerged as a reliable method to perform 25-OH-vitamin D3 and 25-OH-vitamin D2 analysis. Because sample preparation and LC separation are usually the most time consuming steps in a typical quantitative LC–MS-MS analysis, we have developed a high-throughput method for the quantitation of vitamin D using both multiplexed LC and on-line SPE. The overlapping LC runs and targeted data acquisition, combined with online sample preparation, result in a higher overall throughput for the system. The method described here is for the routine analysis of 25-OH-vitamin D3 and D2 (25-hydroxycholecalciferol and 25-hydroxyergocalciferol) in human serum and plasma samples. Calibration is performed using a lyophilized, multilevel plasma calibrator set of known concentration. Lyophilized plasma control samples at clinically relevant low and high concentrations serve to establish the target analyte range. The method uses deuterated 25-OH-vitamin D3 as an internal standard to correct for sample and instrument variability. Samples are analyzed using the atmospheric-pressure chemical ionization (APCI) mode for maximum sensitivity.

Vitamin D comprises a group of fat-soluble vitamins involved in the regulation of calcium and phosphorus levels in the body (1). Research has shown that vitamin D deficiencies are linked to colon and breast cancers (2), impaired bone mineralization, rickets in children, and possibly osteoporosis in adults (3). The two major forms are vitamin D3 (cholecalciferol) and vitamin D2 (ergocalciferol). Vitamin D3 is produced in the skin upon exposure to ultraviolet B radiation from sunlight, or may be obtained from nutritional sources, especially fatty fish. Vitamin D2 is not synthesized by the human body and must be obtained from plant and other nutritional sources. Vitamin D3 is converted to 25-OH-vitamin D3 in the liver and then further hydroxylated to 1,25-OH-vitamin D3, the major biologically active hormone, in the kidneys. Vitamin D is stored in the body as 25-OH-vitamin D, which is the most commonly measured metabolite for determining an individual's vitamin D levels.

Traditional laboratory-based testing for 25-OH-vitamin D3 and 25-OH-vitamin D2 is performed using radioimmunoassay (RIA), chemiluminescence immunoassay, or high performance liquid chromatography (HPLC)–UV. Recently, liquid chromatography–tandem mass spectrometry (LC–MS-MS) has emerged as a reliable method to perform 25-OH-vitamin D3 and 25-OH-vitamin D2 analysis (4). To improve the throughput of LC–MS-MS analysis, we have developed a rapid method for the quantification of these analytes using a system that has been specifically designed to significantly increase the throughput of routine assays by accelerating both the sample preparation and the LC analysis. The system synchronizes autosampler injection ports, LC pumps, selector valve, and a mass spectrometer, enabling the autosampler to inject samples into two parallel LC streams using a system-defined timing schedule. The mass spectrometer acquires data throughout a specified retention time window in each LC sample run. The system also controls a series of switching valves, which are used for on-line solid-phase extraction (SPE) and the subsequent liquid chromatography analysis. The overlapping LC runs and targeted data acquisition, combined with online sample preparation, result in a higher overall throughput for the system. This application demonstrates how the multiplex system with integrated on-line sample cleanup can be used to double the throughput of the vitamin D analysis by LC–MS-MS.

Lyophilized calibrators and controls were obtained from Chromsystems (Munich, Germany), and were reconstituted in distilled water. A 100-μL volume of each sample-calibrator-control was pipetted into a 1.5-mL reaction vial. Next, 25 μL of a precipation reagent and 200 μL of an internal standard solution were added, and the samples were mixed using a vortex mixer for at least 20 s to precipitate the proteins. Samples were then incubated for 10 min at 4 °C in a water–ice bath, and centrifuged at 15,000g for 10 min. The clean, precipitate-free supernatant was transferred to an HPLC vial equipped with a 200-μL insert for analysis by LC–MS-MS.

Chromatographic separation was achieved using the analytical column included in the Chromsystems MassChrom reagent kit for the LC–MS-MS analysis of 25-OH-vitamin D3/D2 in serum or plasma. Mobile phases A and B were used as provided in the kit. The injected sample was initially loaded onto a trap column and rinsed for 1 min using mobile phase A. After 1 min, the sample was eluted from the trap column onto the analytical column, using mobile phase B. The duration of the entire run was 5 min.

Figure 4: Sequence of timed events during a typical multiplex run.

A multiplex LC method was created using the hardware module control software, which synchronizes sample injections in staggered LC runs and enables targeted MS data acquisition in a predetermined retention time window on both of the parallel LC streams. The retention time window to be used for MS data acquisition was specified by highlighting the chromatographic region of interest (Figure 3).

A conventional singleplex LC–MS-MS analysis of 25-OH-vitamin D3 and 25-OH-vitamin D2 was performed, consisting of 92 consecutive injections, and the run time was then compared to that of the equivalent multiplex LC–MS-MS analysis of 92 samples using the integrated multiplex LC–MS-MS system. The sequence of timed events during the multiplex run is illustrated in Figure 4. The use of Cliquid software (AB Sciex) enabled automated sample analysis, processing of acquired data, and reporting of results. The total run time for the singleplex analysis was 8 h 26 min. In comparison, the run time for the multiplex analysis was 4 h 19 min, thus saving 4 h 17 min and increasing overall throughput 1.9 times.

Table I: Accuracy and precision for analysis of 25-OH-vitamin D3

The quality of the results was in no way compromised when the analysis was performed on parallel channels using the integrated multiplex LC–MS-MS system. Representative chromatograms for Calibrator 1 and Control 1 are shown in Figure 5, and the %CVs and accuracies obtained for the calibrators and controls (analyzed on both streams) are summarized in Tables I and II. The coefficient of variation obtained for the analysis of the calibrators and controls, using on-line sample clean-up, were all less than 10%, and the accuracies ranged from 85.9% to 107.6% for both 25-OH vitamin D3 and 25-OH vitamin D2, on both stream 1 and stream 2.

Table II: Accuracy and precision for analysis of 25-OH-vitamin D2

The calibration curves in Figure 6 were generated using the Chromsystems plasma calibrators, with the low- and high-level controls. The calibration curves were produced on both LC streams, for both 25-OH vitamin D3 and 25-OH vitamin D2, and demonstrate the range and linearity obtained for the assay. These results demonstrate that the data integrity was maintained when adapting the singleplex on-line SPE LC–MS-MS method to the integrated multiplex LC–MS-MS system.

The ability to multiplex two LC systems, synchronized to a single tandem mass spectrometer, allows laboratories to increase throughput to handle increasing numbers of samples. The dual channel multiplex LC–MS-MS system, with integrated and automated on-line sample cleanup, achieved a twofold increase in throughput for the analysis of 25-OH-vitamin D2 and 25-OH-vitamin D3 when compared to the same analysis performed on a conventional LC–MS-MS system with on-line SPE. This allows for considerable savings in both time and cost. No compromise in data quality, accuracy, or reproducibility was observed when the identical analysis was transferred from a singleplex to a multiplex system. 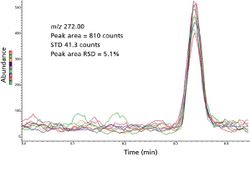 Why Use Signal-To-Noise As a Measure of MS Performance When It Is Often Meaningless?