Lynne Taylor of the Department of Industrial and Physical Pharmacy at Purdue University discusses her research using Raman and IR spectroscopy to study drugs and drug excipients as well as her research with crystallization and studying the physicochemical properties of drug-rich nanodroplets.

The physicochemical properties of drugs are often very diverse and challenging to analyze. We recently spoke with Dr. Lynne Taylor of the Department of Industrial and Physical Pharmacy at Purdue University, and the 2014 Coblentz Society Craver Award winner, about her ongoing research using Raman and infrared (IR) spectroscopy to study drugs and drug excipients — and the interactions of the two. Here, she discusses the various avenues of her research, including crystallization and drug-rich nanodroplets.

How did you become involved in improving drug delivery through studying the physicochemical properties of drugs and excipients?

Taylor: After qualifying as a pharmacist in the United Kingdom, I worked for a year in a hospital in Zimbabwe. I saw a lot of substandard medicines being used, and also had to make several different types of medicines including creams and cough syrups, since there were so many drug shortages. This sparked my interest in formulation, and I returned to the UK to undertake a PhD in this area at the University of Bradford. The longer I worked in the area, the more I realized that a medicine is more than a molecule, and that how you formulate a drug is key to achieving a good therapeutic outcome.

What are the biggest challenges you have faced in this research?

Taylor: I think the biggest challenge is the diversity in properties of drugs and excipients. For example, a drug can exist in several different solid state forms, and can undergo transformations between the different forms with consequences for the effectiveness of the dosage form. Excipients can have a huge impact on the rate of these transformations, but at the moment we can't predict these effects. So, you can work with one drug and think that you understand the system, but get completely different results when you switch compounds.

Taylor: Different solid state forms of drugs often have unique Raman spectra, so that Raman spectroscopy can be used to identify and even quantify which polymorph or other solid state forms are present. With fiber-optically coupled Raman systems, this means that you can monitor transformations between different forms during processing operations, or even mimic the dissolution process that would happen in the stomach, and see how the transformation kinetics vary with different conditions. Most drugs are aromatic compounds, whereas most excipients are not, so there are virtually always some unique drug peaks that are Raman active and are not masked by excipients. This means that Raman spectroscopy is a great method for evaluating the drug in the presence of excipients, and even in the final dosage form.

In a paper you published in 2009 (1), you used infrared (IR) and Raman spectroscopy to investigate the contributing factors in the process of disproportionation whereby salt converts back to the free form of a drug. Can you please tell us about that work and what the results meant for your next project?

Taylor: Drugs are often produced as salts since this makes them dissolve faster. Many drugs are not very soluble, and it is very important that they dissolve fast enough from tablets after they are swallowed, so that they have the correct therapeutic effect. If the salt converts back to the free form, it may not dissolve fast enough. Excipients can change the local pH in a tablet and cause a drug to transform back to the free form. You can't study this process with a solution chemistry technique, you have to study the drug in the solid formulation. Raman and IR spectroscopy are ideal for this purpose because the salt and free form of the drug have different spectra. So you can mix the drug powder with various excipients, expose them to different relative humidity conditions, and find out which excipients will cause the drug to convert to the free form and which excipients have no effect. Obviously, for the final formulation, it is best to select those excipients that don't cause these types of changes.

You have also published quite a bit of research on crystallization. Can you please tell us about your research in that area? What spectroscopic techniques in addition to Raman were used in that research?

Taylor: I am actually very interested in preventing drugs from crystallizing, which means that I have to study crystallization! As mentioned previously, many of the new drugs that are being discovered are not very water soluble. An alternative to making salts is to destroy the crystal lattice and make an amorphous solid. Amorphous solids are high energy forms, and can dissolve to produce solutions with a temporarily higher solution concentration than the crystalline form. The trick is to prevent crystallization both in the solid formulation and from the solution produced following dissolution. Normally, polymers are added as crystallization inhibitors, but we don't understand much about how polymers inhibit crystallization, or how to find the best polymer for a given drug. We routinely use Raman spectroscopy to monitor crystallization kinetics, but also have used IR spectroscopy to study drug–polymer hydrogen bonding interactions in solid drug–polymer blends, and in-line ultraviolet spectroscopy to measure solution concentration versus time profiles during dissolution of the amorphous formulation. In collaboration with my colleague, Professor Garth Simpson in the Chemistry Department at Purdue, we are also using second-order nonlinear optical imaging of chiral crystals for the sensitive detection of crystallinity in amorphous formulations (2).

What do you plan on researching next?

Taylor: Recently, we have been studying the solution phase behavior of poorly water soluble drugs. Interestingly, when amorphous drug–polymer blends are dissolved, in some cases we have observed the spontaneous formation of drug-rich nanodroplets (3). We plan to study the physicochemical properties of these nanodroplets and to evaluate how they can be used to improve drug delivery. I am also very interested in developing new excipients based on polysaccharide derivatives. I have a very fruitful collaboration with Professor Kevin Edgar, a renowned polymer chemist at Virginia Tech. Together we are exploring the properties of a variety of novel polysaccharide derivatives, in particular as crystallization inhibitors.

As a young scientist you have a great list of accomplishments ranging from your publication number to the positions you've held and awards you've received. Do you have any advice for scientists just starting out in this field?

Taylor: I've been fortunate enough to work in a few different countries including the UK, Zimbabwe, Sweden, and the United States. I think these experiences have made me very open to collaborating with people in different research areas, which has been immensely rewarding. My advice would be to find people with complementary interests to interact with, rather than working in isolation. Networking is very important. The other important piece of advice that I can give, is that young scientists should try and stay focused. Today's working environment can be incredibly demanding, making work–life balance challenging. By staying focused, I think it is possible to progress well in one's career, while balancing family responsibilities (most of the time!). 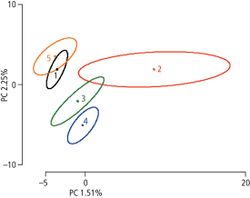