Review of the 63rd Conference on Mass Spectrometry and Allied Topics

We present a brief review of this year’s ASMS conference, which took place May 31–June 4, 2015, in St. Louis, Missouri.

The 63rd Conference on Mass Spectrometry and Allied Topics took place this year in St. Louis, Missouri, from May 31 to June 4 at the America’s Center Convention Complex. Preceding the conference program opening, one- and two-day short courses took place on Saturday, May 31, and Sunday, June 1.

The conference program opened Sunday with tutorial sessions and a plenary lecture followed by a welcome reception in the exhibit hall. The tutorials were given by Ann L. Oberg of the Mayo Clinic (Rochester, Minnesota), and Gary Patti of Washington University, St. Louis (St. Louis, Missouri). Oberg’s talk was titled “Statistical Experimental Design: The Building Blocks of a Good Experiment.” Patti gave a talk called “Metabolite Profiling at the ‘Omic’ Scale: Untargeted Does Not Mean Unplanned.”

A trio of plenary events took place during the week, two of which were award lectures, given by Brian T. Chait and Michael J. MacCoss, on Monday and Tuesday, respectively (details below). On Thursday, G. Michael Lemole, Jr. of the University of Arizona College of Medicine (Tucson, Arizona) gave a plenary lecture titled “The Evolution of Modern Neurosurgery: A History of Trial and Error, Success and Failure.” As in previous years, the conference also featured daily oral sessions, poster sessions, exhibits, and workshops.

Awards
Several awards were presented at this year’s conference. The Award for a Distinguished Contribution in Mass Spectrometry was presented on Monday afternoon to Brian T. Chait of the Laboratory of Mass Spectrometry and Gaseous Ion Chemistry at The Rockefeller University (New York, New York) for the recognition and demonstration of the link between protein structure and conformation and electrospray ionization mass spectra. His discovery that a protein’s solution phase conformation impacts its electrospray ionization mass spectrometry (ESI-MS) charge state distribution (CSD) removed the barriers isolating mass spectrometry from its ability to probe higher order macromolecular structures and fostered a continuing deluge of applications of MS to noncovalent assemblies, hydrogen-deuterium exchange, probes of gas-phase protein structure, and ultimately “native mass spectrometry.”

The Biemann Medal, presented on Tuesday afternoon, went to Michael J. MacCoss of the Department of Genome Sciences at the University of Washington (Seattle, Washington) for his contributions of serious and long-lasting impact to the field of proteomics. Chief among these is software development that has greatly facilitated proteomics. MacCoss’ philosophy on making software freely available and continually supporting this software so that it enables others has greatly benefited the proteomic sciences.

Also presented on Tuesday afternoon were the 2015 Research Awards, funded by Thermo Scientific and Waters Corporation in the amount of $35,000 each. This year’s awardees were Michael Bereman of North Carolina State University (Raleigh, North Carolina), and Alexander Ivanov of Northeastern University (Boston, Massachusetts).

On Wednesday afternoon, the Ron A. Hites Award for an Outstanding Research Publication in the Journal of the American Society for Mass Spectrometry (JASMS) went to John Klassen of the University of Alberta (Edmonton, Alberta, Canada), and co-authors Lan Liu, Alyson Baergen, Klaus Michelsen, Elena N. Kitova, and Paul D. Schnier for their paper “Energetics of Intermolecular Hydrogen Bonds in a Hydrophobic Cavity.” The award recognizes an outstanding publication of original research, based on a paper’s innovative aspects, technical and presentation quality, likely stimulation of future research, and impact on future applications. It is named to honor Professor Ron Hites of Indiana University, who led the creation of JASMS in 1988 while president of ASMS. It includes $2000 and a certificate for each author.

Postdoctoral Awards were also presented on Wednesday afternoon. Three awards in the amount of $10,000 each went to Martin Paine of Georgia Institute of Technology, Valentina Pirro of Purdue University, and Gloria Sheynkman of Harvard Medical School. The awards are intended to promote the professional career development of postdoctoral fellows in the field of mass spectrometry. Activities funded by these awards include conference and workshop attendance, travel to other mass spectrometry laboratories, and the purchase of books and software.

A closing event took place Thursday evening at the City Museum, where visitors traveled through a maze of turrets and open “tunnels” that led to fantastic structures and sculptures. A test of balance and courage could be taken in the museum’s caves and “impossible” slides.

ASMS 2016
The 64th Annual ASMS Conference will be held June 5-9, 2016, in San Antonio, Texas. For more information, visit www.asms.org in the coming months. 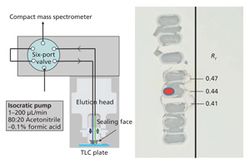