This information is a supplementary to the article “Polarized Raman Spectroscopy of Aligned Semiconducting Single-Walled Carbon Nanotubes” that was published in the June 2016 Spectroscopy supplemental issue Raman Technology for Today’s Spectroscopists (1).

This information is supplementary to the article “Polarized Raman Spectroscopy of Aligned Semiconducting Single-Walled Carbon Nanotubes” that was published in the June 2016 Spectroscopy supplemental issue Raman Technology for Today’s Spectroscopists (1).

Each boxed area in Figure 4 is 11 x 47 µm (517 sq. µm) with spectra collected at a spatial resolution (pixel size) of 0.3 µm; this comes out to ~1800 individual spectra. Therefore, each boxed area produces a single Raman spectrum representing the averaged sample area. We calculated the peak area of the G-Band from the averaged spectrum collected at each polarization configuration (V_V, H_H) and took the ratio. A correction factor was applied to compensate for the reduced optical throughput in the H_H configuration. This correction factor is calculated from the silicon peak at 519 cm-1 Raman shift which is not sensitive to polarization.

The V_V and H_H polarization images were exported from OMNICxi as grayscale TIFF images having the same intensity scale. This preserved the relative numerical values of each pixel between the two images. The TIFF images were imported into ImageJ where the subsequent orientation image was created by dividing the V_V image by the H_H image (3). The resulting image was scaled by a factor of 0.882 to correct for the lower instrument throughput caused by additional polarization optics (half wave plate) when collecting the H_H image. 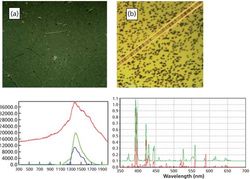 Raman Spectroscopy for Identification of Contaminant Materials in Pharmaceuticals 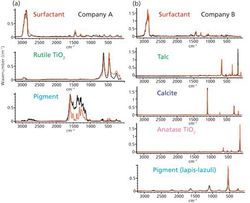