A vibration-resistant FT-IR spectrometer is used to monitor an industrially relevant fermentation process.

A vibration-resistant FT-IR spectrometer is used to monitor an industrially relevant fermentation process. The production of two alcohols is monitored in real time along with the consumption of the sugar feedstock with concentrations ranging from 0.1 to 25 g L-1, and is fitted to HPLC data using PLS methodology.

In situ chemical monitoring of chemical reactions is one of the most powerful tools in a modern spectroscopist’s arsenal. In fact, some chemical processes can only be truly controlled if the reaction state is known in real time. However, standard FT-IR analytical instruments are highly sensitive to vibration, and often cumbersome, making it a challenge to use them in a production environment. Here we report the use of the vibration-resistant Keit FT-IR spectrometer for in-process monitoring of an industrial fermentation process. The spectrometer was used to monitor the production of the primary alcohol product, along with a secondary alcohol product and the consumption of the sugar feedstock.

Partial least square (PLS) regression method was used for a calibration and prediction model for the produced alcohols and consumed sugars. The spectral region from 900 to 1400 cm-1 was used for developing the model. The data was pre-processed with mean centering and three LVs were used to build the model.

Both the HPLC and spectral data for the reaction run is shown in Figure 1. The results clearly show that the spectroscopic data follows the HPLC data very closely, with minimal deviations between the two. Both alcohol species are observed to increase in concentration over the entire process, with a concentration range of 0.1 through to 9 g L-1. Moreover, the R2 values for correlations of predicted versus measured concentrations of alcohol 1, alcohol 2, and sugar feedstocks were 0.923, 0.912, and 0.983, respectively.

These results show that the Keit FT-IR spectrometer can be effectively used to monitor an industrial process in operando, with the ability to track the concentration of at least three different constituents simultaneously, and over a large range of sensitivity. The Keit FT-IR spectrometer helps improve quality, reduce waste, and improve facility utilization using a more robust and stable instrument. 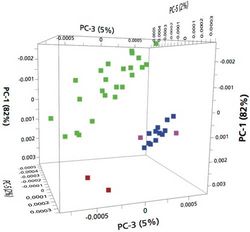 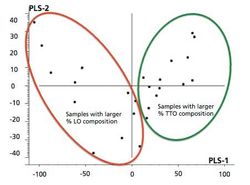