LCGC and Spectroscopy review some of the highlights and award recipients from this year's ASMS conference, held May 23–27, 2010, in Salt Lake City, Utah.

May brought a lot more than spring to the air this year as the scientific community geared up for the 58th ASMS Conference on Mass Spectrometry and Allied Topics, held at the Salt Palace Convention Center in Salt Lake City, Utah from May 23 through May 27.

The conference began early for some attendees, with several one-and two-day short courses beginning on Saturday May 22, from 9 a.m. to 4:30 p.m. Sunday marked the official start of the conference with more short courses and informative tutorial lectures from 5:00 to 6:30 p.m.

Following the tutorial lectures was the opening session and Plenary Lecture, which featured a talk from Leroy Hood, of the Institute for Systems Biology, entitled "Systems Medicine and Emerging Technologies: Catalyzing the Transformation from Reactive to Proactive (P4) Medicine." Dr. Hood received his M.D. from Johns Hopkins School of Medicine in 1964 and his Ph.D. in biochemistry from the California Institute of technology in 1968. He has received many awards and accolades over the years, including the 2004 Biotechnology Heritage Award, the 2003 Association for Molecular Pathology (AMP) Award for Excellence in Molecular Diagnostics, the 2006 Heinz Award in Technology, the Economy, and Employment, and in 2007, he was elected to the Inventors Hall of Fame (for the automated DNA sequencer).

A major highlight of ASMS was the award presentations. Each year, ASMS distributes some of the most prestigious awards in the industry, and these coveted honors attract a large number of applications and nominees. The three most prominent awards include the Award for a Distinguished Contribution in Mass Spectrometry, The Biemann Medal, and the Ron A. Hites Award.

The Award for a Distinguished Contribution in Mass Spectrometry was presented to Dr. Marvin L. Vestal, founder, CEO, and CSO of Virgin Instruments, on Monday, May 24. Vestal's development of the practical matrix-assisted laser desorption ionization time-of-flight (MALDI-TOF) and TOF-TOF mass spectrometers resulted in the first commercial MALDI-TOF instrument — the Voyagers series. More than half of MALDI-TOF instruments in use today are based on Dr. Vestal's designs.

A significant accomplishment of his work is the development of a comprehensive theoretical model for the various components of a TOF analyzer with a view toward optimizing performance of a complete system for particular applications. Dr. Vestal implemented this theoretical approach to design a family of MALDI-TOF instruments that employed delayed extraction, and through further refinements, the construction of a tandem time-of-flight instrument. Advances in related technology have been combined with Dr. Vestal's theoretical predictions to provide MALDI-TOF MS and MS-MS systems that out-perform earlier instruments by orders of magnitude. The MALDI-TOF MS and MS-MS systems designed by Dr. Vestal have had and are continuing to have an enormously positive impact on many important areas of research, including proteomics, glycomics, cell signaling, structural biology, tissue imaging, and polymer science.

The Biemann Medal was presented to Dr. David C. Muddiman, of North Carolina State University for his discovery that one strand of a PCR amplicon appears more intense than the complementary strand in an electrospray ionization (ESI) mass spectrum. Dr. Muddiman has developed alternative ion sources for FT-ion cyclotron resonance (ICR) MS, including the dual ESI source, MALDI-ESI, liquid MALDI-ESI, and an "air amplifier" for more efficient ESI. The significance of these advances is that they allow generation of multiple charged species, which are uniquely suited for FT-ICR-MS due to the inverse relationship between frequency and m/z.

Dr. Muddiman has published over 150 papers in peer-reviewed journals and is recognized for his unusual combination of depth and breadth in the vibrant field of biological mass spectrometry. He is currently Professor of Chemistry at North Carolina State University.

The Ron A. Hites Award is given annually for an exemplary paper published in the previous two volumes of the Journal of the American Society for Mass Spectrometry. The award recognizes a high quality presentation of outstanding original research, and papers may be nominated by anyone who reads JASMS.

The award-winning manuscript was selected by a confidential committee. Selection was based on the committee's judgment of each paper's innovative aspects, technical quality, likely stimulation of future research, likely impact on future applications, and quality of presentation. Manuscript citations and impact factor may also be considered but are not the major determinants of selection. The author received a personal award of $2000 and all co-authors received certificates of commendation in addition.

Finally, the recipients of the two 2010 ASMS Research awards were Hao Chen, Ohio University, Athens, Ohio; and Sarah Trimpin, Wayne State University, Detroit, Michigan. These prestigious awards were designed to promote academic research by young scientists in mass spectrometry, and are open to academic scientists within four years of joining the tenure track faculty or equivalent in a North American university. Awards of $25,000 each were made to the recipients' respective universities in their names and will be used exclusively to fund their work.

ASMS gave the scientific community another hit this year with many superb sessions, posters, workshops, and hospitality suites. Next year's ASMS conference is scheduled to be in Denver, Colorado — we at LCGC and Spectroscopy can't wait to see what the Rocky Mountains and the 2011 program have to offer! 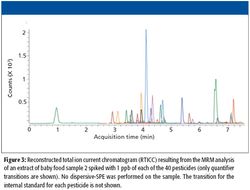