Gas chromatography with electron ionization and mass spectrometry (GC–EI-MS) detection is a workhorse among analytical techniques in metabolomics. A major challenge in the utilization of GC–EI-MS in metabolomics is the identification of unknowns.

Gas chromatography with electron ionization and mass spectrometry (GC–EI-MS) detection is a workhorse among analytical techniques in metabolomics. A major challenge in the utilization of GC–EI-MS in metabolomics is the identification of unknowns. The recent availability of high resolution, accurate mass, time-of-flight mass spectrometry (TOF-MS) systems provides great potential for identifying unknowns by reducing uncertainty in possible formulas and enhancing detection continuity between sample sets. A workflow using GC–EI-MS spectra for library identification, with molecular formula information for unknowns provided by chemical ionization-mass spectrometry (CI-MS) and accurate mass analysis was used for the analysis of blood plasma.

Metabolomics provides a foundation for quantitative, comparative biology and is indispensable for the comprehensive characterization of molecules and differential analysis of populations. It entails instrumental detection, characterization, and quantification of small molecules (molecular weight < 1500 Da) produced, or transformed in the cells of living organisms (1,2). Although no single instrument is capable of fully profiling the metabolome, the unique capabilities of time-of-flight mass spectrometry (TOF-MS) make it an ideal tool for metabolomic studies. Gas chromatography–time-of-fight-mass spectrometry (GC–TOF-MS) is a powerful approach for unbiased metabolic profiling and quantitation of a diverse array of metabolites (3,4). High-resolution TOF-MS provides additional benefits such as mass accuracies below 1 ppm for robust formula determinations and resolving power in excess of 50,000 for resolution of isobars and minimization of background interferences. A workflow that combines accurate mass electron ionization (EI) and chemical ionization (CI) high-resolution TOF-MS for confident characterization of different compound classes was used for the analysis of human blood plasma. It includes recommendations for sample preparation, analytical conditions, and data analysis.

The majority of metabolites in blood plasma are labile and exhibit low volatility making their analysis by GC difficult. This is addressed by using a two step derivatization procedure involving the treatment of samples with O-methylhydroxylamine hydrochloride in pyridine (MEOX) followed by silylation with N-methyl-N-trifluoroacetamide/1% trimethylchlorosilane (MSTFA) (5). This two-step procedure minimizes the number of possible forms of reducing sugars as shown for glucose in Figure 1. Treatment of glucose with MSTFA (Figure 1b) results in four different forms (α- and β-furanose and pyranose trimethylsilyl derivatives), while the two-step procedure typically produces two geometric isomers of the open chain structure of the monosaccharide (Figure 1a). Note that one isomer is produced preferentially in this two-step derivatization of glucose. This not only simplifies the analysis of blood samples, but also increases the likelihood of compound detection.

Blood plasma (100 μL) was transferred to a 2-mL microtube and treated with 400 μL of methanol to precipitate proteins. The heterogeneous mixture was vortexed for 30 s at 2500 rpm and centrifuged for 15 min at 15,000 rpm. The supernatant was removed and transferred to a GC vial (400 μL insert). The mixture was dried with a SpeedVac for 2 h and lyophilized overnight at -50 °C to remove residual water. The dry sample was treated with 25 μL of MEOX reagent (20 mg/mL in pyridine) and shaken at 80 °C for 15 min. It was then treated with 75 μL of MSTFA and shaken at 80 °C for 15 min. The product mixture was allowed to cool to room temperature, vortexed for 30 s and analyzed by EI and CI high-resolution TOF-MS.

See Tables I and II in the on-line version of this article for the GC and MS instrument settings.

An analytical ion chromatogram (AIC) for National Institute of Standards and Technology (NIST) human plasma is displayed in Figure 3, and can be divided into three general areas based on compound classes: acids, diacids, amino acids; sugars and related compounds; and fatty acids and sterols. Chromatographic peaks corresponding to derivatives of 5-oxo-proline, inositol, and α-tocopherol are marked with asterisks (*).

Quality EI high-resolution TOF-MS data indicated traditional fragmentation and facilitated searches against nominal mass libraries as evident by similarity values for representative compounds in human plasma (Table III). Similarity values for nine of the compounds ranged from 848 to 915 out of a possible score of 1000.

An increased level of confidence for compound identification was achieved through accurate mass molecular and fragment ion formula determinations. For example, the peak true (deconvoluted) mass spectrum, NIST library match, and molecular ion mass accuracy values for a creatinine derivative (3 TMS) in human plasma are shown in Figure 4 in the on-line version.

Figure 5: (a) EI and (b) CI high-resolution TOF-MS spectra for inositol.

Leveraging accurate mass data was critical for the characterization of compound 6 (Tables III and IV) because spectral similarity searches were inconclusive. It was misidentified as the MEOX/TMS derivative of maltose (similarity = 829/1000). Furthermore, the first 10 library hits (similarity >800) were derivatized disaccharides (Table V). This was not surprising since sugars are difficult to characterize because of their thermal instability and similar EI-MS fragmentation patterns.

Acquisition of CI high-resolution TOF-MS data for compound 6 (Figure 6) resulted in a protonated molecular ion at m/z = 570.29486 (C22H55NO6Si5, MA = 0.00 ppm). Compound 6 was determined unequivocally to be glucose (MEOX, 5 TMS) after comparison to data obtained from a derivatized authentic standard.

Figure 6: (a) EI and (b) CI high-resolution TOF-MS data for compound 6 in human plasma.

The methodology presented in this study provides a workflow for rapid and reliable profiling of human plasma. While high quality spectral data and excellent mass accuracy values resulted in confident identification of most compounds using EI, the addition of CI high-resolution TOF-MS data was essential for characterization of labile blood plasma compounds with absent or low-abundance molecular ions.

The on-line version of this article includes Figure 4 as well as Tables I and II. To see the full version please visit: spectroscopyonline.com/AlonsoCTMS1013. 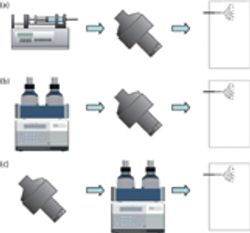