End of the Spectrum: Infrared Spectrometry on the Moon

While previous missions to the moon have provided the scientific community with a chance to study the lunar surface via rock samples that were brought back on various missions, the research that has been conducted has merely scratched the surface of the information that can be gleaned from lunar exploration.

The European Space Agency (ESA) decided that the use of infrared spectroscopy would shed much more light on lunar study, and launched the unmanned SMART-1 (Small Missions for Advanced Research in Technology) satellite on September 27, 2003. The main objective of the SMART-1 mission was to perform tests on its solar-powered ion thruster, while its secondary objective was to collect more data on the moon. The ESA wants to try to shed more light on the origin and evolution of the moon. They present the theory that the moon may have been formed as the result of a huge asteroid's impact with Earth 4.5 billion years ago.

The satellite, a cube measuring around a meter on each side and weighing 807 lb, was equipped with the SMART-1 Infrared Spectrometer (SIR), which was designed for the identification of mineral spectra of olivine and pyroxene, and to identify wavelengths from 0.93 to 2.4 μm, performing reflectance spectroscopy on 256 channels. The SIR experiment was provided by a consortium led by the Max-Planck-Institut für Aeronomie (MPAe), Garching, Germany. The principal investigator was Uwe Keller, while other members of the consortium were Carl Zeiss, Jena, and tec5, Frankfurt, Germany.

The SIR unit itself is small and self-contained, weighing only around 2 kg in total. The SIR was housed in two main units on the SMART-1 spacecraft, with optics, sensor head, and preamplifier electronics located outside, with the rest of the unit's electronics located inside. On the SMART-1 mission, the SIR was often used in conjunction with the Advanced Moon micro-Imager Experiment (AMIE), a miniature color camera that was used for lunar imaging. Because the SIR and the AMIE had the same alignment, simultaneous and complementary observations were possible. SMART-1 created a three-dimensional map of the lunar surface using both X-ray and infrared imaging with the SIR, with images taken from multiple angles. X-ray spectroscopy was also used to analyze the moon's chemical composition. Infrared spectroscopy was utilized to search for frozen water at the moon's south pole, where some areas are never exposed to direct sunlight. Also mapped were the Peaks of Eternal Light (PELs), which are mountaintops that are always exposed to the sun, encircled by craters that are permanently in darkness.

An artistÃÂ´s rendering of the SMART-1 satellite in orbit around the moon in order to study the lunar surface.

At the conclusion of the SMART-1 mission, the satellite was intentionally crashed into the lunar surface. The craft slammed into the near side of the moon in the region of the "Lake of Excellence" at a speed of nearly 4500 mph. This was done to attempt to kick up lunar dust so scientists could study its composition.

Officials hope to use the SIR as a valuable payload for future missions, such as to Mars and Mercury, as well as to study asteroids and comets. SIR could examine not only planetary and celestial surfaces, but also gases that exhibit absorption features in the near infrared. Experts believe that commercial spectrometers in the ultraviolet and visible range could gain valuable technological insight as a result of the SIR mission.

An Ode to Traceability and Calibration Interval 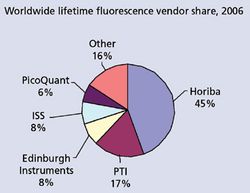