This slender volume belongs on the bookshelf of every experimental spectroscopist, and offers an alternative to a large, comprehensive textbook for an undergraduate instrumental chemistry course.

Choosing a text for an undergraduate instrumental chemistry course can be a challenge. Often, the syllabus for such a course is determined by the expertise of the instructor as well as the resources of the department or college. Many of the existing workhorse tomes are large and encyclopedic; usually, one covers a hand-picked selection of topics and chapters from these books, telling students (who will promptly unload the book when the course is over) that the text is an excellent reference which should remain on their shelf. Thus, it is refreshing to encounter Mark Vitha’s slender new book Spectroscopy: Principles and Instrumentation (Wiley, 2019). As the title suggests, the book covers only the spectroscopy portion of a comprehensive class on analytical instrumentation, and within that area there are topics not covered, such as atomic spectroscopy, nuclear magnetic resonance (NMR) and X-ray methods. Yet, given its intended limited scope, the book is excellent and it is a teaching book. Vitha is an experienced educator and analytical chemist schooled among giants in the field. Vitha writes as if he is sitting with you explaining concepts one-on-one, bringing everyday experiences of color, light, and natural phenomena into the discussion. There are worked problems throughout each chapter, and about 15 to 28 problems at the end of each chapter, all of which have solutions provided at the back of the book. Each chapter closes with a summary of major points. There are five sections: (1) fundamentals of spectroscopy; (2) ultraviolet-visible (UV-vis) spectrophotometry; (3) molecular luminescence: fluorescence, phosphorescence, and chemiluminescence; (4) infrared (IR) spectroscopy; and (5) Raman spectroscopy. It should be noted that production of this book began with the intent to create a new version of the well-known (and out-of-print) 7th edition textbook by H.H. Willard, L.L. Merritt, J.A. Dean, and F.A Settle, Instrumental Methods of Analysis. That effort derailed, and Vitha took over the task on his own, paring the book down to its current size and scope with the view that the above listed four spectroscopies, apart from NMR and atomic spectroscopy, are the most widely applied and encountered by graduating students. Vitha states in the preface that Frank Settle Jr.,owner of the copyright to the Willard 7th edition, granted permission for the use of figures and text passages without quotations or indentations, as needed. These figures may be recognized (among many new ones) mostly in chapter 2, which covers the components of optical instrumentation. The chapter on Raman spectroscopy was contributed by Dr. Jason Maher.

Vitha’s ability to weave theory and experiment together is a particular strength and a highlight of chapter 2. For example, sections covering deviations from Beer’s law are merged under a heading “The Practice of Spectrophotometry,” which includes guidance on calibration and on preparing samples and standards, which leads directly into a section entitled “The Desirable Absorbance Range.” The section entitled “Checking for True Zero Absorbance,” blended into the discussion of single beam spectrophotometers, is very nice, as are the tables of specifications for scanning dispersive vs. diode array instruments, in which Vitha is essentially teaching students how to evaluate information provided by manufacturers.

The quality of a textbook’s figures overall affects a student’s experience of that text, especially with a subject like optics and instrumentation, where the ability to visualize optical phenomena, such as how light is gathered, manipulated, and taken up by molecules, can be critical to the learning process. Vitha’s figures are a strength in this respect. For example, the depiction of the light rays, with respect to fluorophores, as arrows and stars, respectively, in a cuvette (Chapter 3 on molecular fluorescence) fosters understanding at the particulate level of fluorescence emission and the effect of analyte concentration. The graphical and molecular depictions of the Raman effect in chapter 5 are a nice touch. Vitha’s use of an electron density map (chapter 4 on IR spectroscopy) reminds students that electrons in vibrating bonds are not localized and that Coulombic forces (not sticks and springs) hold atoms together in space. The schematic illustrating diode array detection, where a spectrum is broken down into portions (chapter 2 on UV-vis spectrophotometry) helps to cement one’s understanding of that process. Many of Vitha’s figures have detailed captions, and this affects the spaces that the figures occupy. A trade-off with small-sized textbooks, having small pages and large figure boxes, is that the figures are not always near to the text in which they are discussed. This is a typesetting problem that could be solved in later editions.

Glossaries of terms and acronyms, a request from my research colleague Dr. Qi Lu, who teaches in a physics and engineering department, will come with time; such additions can transform a narrowly targeted textbook into a reference that is accessible to persons outside the expected group of users.

Another strength of this new book lies in its descriptions of current applications. The chapters on Raman and IR spectroscopy are especially rich in their presentation of diverse areas of application relating to biological systems, pharmaceuticals, clinical measurements, art restoration, and security. There are biological examples throughout the book consistent with today’s molecular-level understanding of these systems and student appetite for such topics.

The introductory section (chapter 1) could be strengthened to include topics that are discussed in later chapters, but whose fundamentals are not given. For example, lasers are described (as light sources) in chapters 3−5, but the basic definition and mechanism invoking an energy diagram are not given. Signal-to-noise ratio (S/N) is mentioned in chapter 2 in the context of slit widths and resolution in monochromators, and in chapter 4 in the context of signal averaging in Fourier transform IR (FT-IR). Vitha may be assuming that students will be introduced to the definition of S/N via other materials at the discretion of the instructor. Considering that S/N is so important to spectroscopy, its definition could have a place in chapter 1. The section introducing diffraction would be much stronger if there was a figure depicting Young’s double slit diffraction experiment, which illustrates the trigonometric relationship expressed in the general grating equation (nλ=d sin Ñ²), with the angle of diffraction (Ñ²), shown in the context of a triangle (1). Such an illustration underpins one’s grasp of the connection between constructive and destructive interference and the ability of a series of slits (or rulings) to project light and dark bands on a focal plane (1). In this case, words can only go so far. The figure would prepare students to digest and understand the more complex diagrams of diffraction gratings in chapter 2. Note, this latter comment comes from someone who has taught from the rival textbook Principles of Instrumental Analysis (Skoog et al.) (1) for over 20 years.

In closing, I will say that this small, slender textbook is packed with understanding. It is highly readable. There is much to like. I believe this book belongs on the shelf of every experimental spectroscopist. Vitha’s goal for an undergraduate instrumental analysis class is for it to be paired with his new (also small-sized) textbook Chromatography: Principles and Instrumentation (Wiley, 2017) (2,3). It may take instructors a bit of time to get away from one large book meeting all one’s needs, but that transition may be well worth the effort. 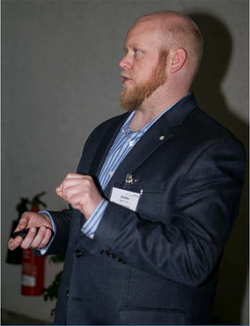 The Emerging Leader in Spectroscopy Award