A "Smart" Oxygen Cuvette has been developed by coating the inner surface of a plastic (PMMA) cuvette with sol-gel based oxygen-sensitive indicator material. This new oxygen sensing system monitors the dissolved oxygen in samples for biological and medical applications.

A "Smart" Oxygen Cuvette has been developed by coating the inner surface of a plastic (PMMA) cuvette with sol-gel based oxygen-sensitive indicator material. This new oxygen sensing system monitors the dissolved oxygen in samples for biological and medical applications. The Smart Oxygen Cuvettes provide resolution of 4 ppb units, accuracy of less than 5% of the reading and 90% response in less than 10 s.

Different methods have been in existence to detect the presence of microorganisms in blood cultures. Early detection of such organisms is of primary importance to the selection of appropriate therapies and doses to be adopted for patients. The information collected using such methods helps in the selection of system parameters optimum for detection of the different microorganisms. Some of the changes such as conversion of oxy- to deoxyghemoglobin within the red blood cells have been detected using spectroscopy methods, which provide data on growth behavior of organisms. In this application note, we explain how a cuvette coated with an oxygen-sensitive indicator acts as a detection system to measure the dissolved partial pressure of oxygen in blood culture systems. We also show the trend in oxygen consumption in response to the increasing density of yeast microorganisms in the blood samples.

The system was calibrated and the dissolved oxygen levels were monitored when the yeast cells were added and the measurements carried out for approximately 30 min. With an objective to study the performance of the Smart Cuvette while sensing oxygen levels in the cell culture, we performed a set of experiments varying the amount of yeast dissolved in blood. The oxygen is consumed by the cells faster if the number of cells is greater. Figure 1 shows the performance of the Smart Oxygen Cuvette in measuring the dissolved oxygen levels in cell culture environment with different yeast amounts added to diluted blood.

Figure 1: Oxygen consumed by cells when different amounts of yeast are added to diluted blood is measured using the Smart Oxygen Cuvette.

A Smart Oxygen cuvette is reported to provide superior measurements of dissolved oxygen in important biological experiments such as in blood culture/bioreactor systems. The integration of Smart Oxygen Cuvettes with advanced phase fluorometry can be used to develop portable systems to measure the presence of bacteria in different blood cultures. Development of a cost effective system integrated with multiplexing capabilities would open a new approach to studying the presence of microorganisms in blood culture systems. Systems of this nature could accelerate intervention procedures and help reduce healthcare costs.

Spectroscopy Market: Weathering the Storm and on the Path to Recovery 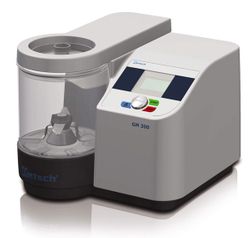 Fat Analysis in Food and Feed with NIR